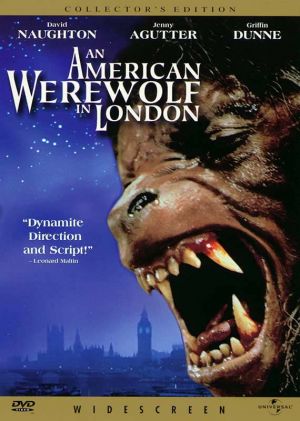 An American Werewolf in London (1981)


Let’s get our teeth into this classic horror!

David and Jack are just two American college students touring Britain before a mysterious werewolf attacks them and passes on its curse.

From the beginning the two American boys are shown as isolated outsiders after they enter an unfriendly pub, and one of them is quickly killed. This highlights the other’s position as lost and lonely, making the viewer instantly root for him. David, the one that survives, is played smoothly by David Naughton and lets the viewer into his world with ease. This also helps later on in the film when things start to go downhill and David feels the effects of the werewolf taking over.

The absolute stand out scene is the first time David turns into a werewolf; for a film made in the 80’s, the visual transformation from human to beast is brilliant to watch and it’s easy to see why so many people genuinely fear that part of the film. What makes it more enjoyable is David’s awareness of the change and his battle against becoming a creature he has an obvious resentment against, which is previously compounded earlier in the film. Once he goes on a rampage the film changes significantly and sparks a conflict where he may endanger his newfound love and with this he becomes his own villain.

Whilst David is cocky and self-assured, his female counterpart, Alex, offers an alternative view into David’s problem and acts as another window for the audience to peer into their world. At the same time, David’s dead friend, Jack, still visits him from time to time as a continuously rotting corpse, and provides most of the deliberately comical moments, while playing an important role in David’s unwinding. “The undead surround me. Have you ever talked to a corpse? It’s boring! I’m lonely!” Unfortunately once you get past this trio of characters there isn’t much acting talent on show, and thankfully the remaining characters are not in scenes long enough to really hinder it. A particular scene where a doctor and a pub’s unfriendly regulars have an awkward conversation fails to make much of an impression, but is over relatively quickly and returns back to David and co.

An American Werewolf in London will entertain even the most vague horror fan and the lead three characters make the film. While some bits haven’t stood the test of time particularly well, THAT scene is still convincing today and is worth the build up alone.