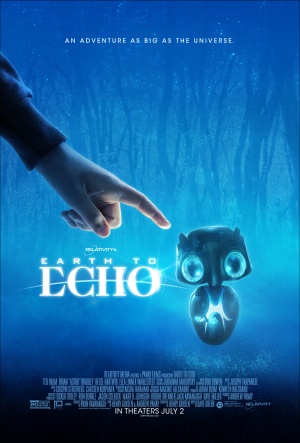 
Echoing old movies can only get you so far. Can Earth to Echo stand out amongst its Sci-Fi peers?

After three boys discover a map on a smart phone they decide to spend the evening cycling fifteen miles to the target point. When they discover a strange beeping piece of metal it takes them on a journey they’ll never forget and tests their friendship throughout the night.

Since the success of 2012s Chronicle, which implemented a found footage style with the use of CCTV cameras, mobile phones and camcorders to illustrate a fantasy story, not much has come out to mimic it, until now. Earth to Echo uses similar visual restrictions and is aided by heavy editing of most scenes to create a quicker and more entertaining viewpoint than what could have been. This sets it apart from a lot of similar movies, as the characters aren’t given much quiet screen time as scenes move relentlessly forward without time to lose interest.

Having said that, the story itself is a rather generic one. Children find a creature and must aid it to health and freedom before the evil authorities get hold of it. The story contains multiple plot holes, or at least big doubtful questions that make it rather silly to watch. Yes, this is a children’s movie but logic still applies. What’s more the creature doesn’t play a major part in the movie either; instead it’s the provider of puzzles and quests for the boys via their smart phones and rarely do they interact with the alien itself. Even when they do it can only beep answers of yes or no and this limits the ability of the film to inspire children’s imaginations. The only parts that could do this are the brief but admittedly spectacular visual moments such as the glimpse of a large spaceship and the deconstruction and reconstruction of an entire lorry as it moves piece by piece past the boy’s car. But these only occur a handful of times and push the point further that a trick was missed here.

The characters Alex, Tuck and Munch are well rounded with all playing their key roles of sympathetic hero, egotist and scared geek to satisfy needs of comedy and empathy at suitable times. Teo Halm who plays Alex shows the most promise as a foster child who has an emotional attachment to the abandoned alien and could be an actor to look out for in the future.

These actors and characters along with the found-footage style make the film a decent and quick paced watch but Earth to Echo isn’t new and isn’t particularly clever. This won’t beat E.T., Flight of the Navigator or How to Train Your Dragon on sheer scope and imagination, but may well do the job for the summer.

Did you think the alien took a back seat in this movie? What’s your favourite children’s Sci-Fi? Let us know in the comments below.