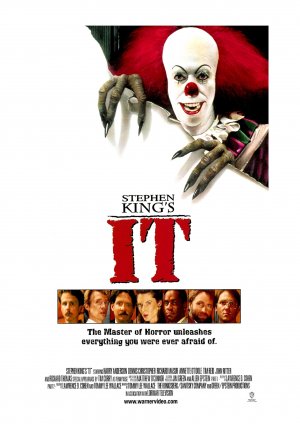 Seven friends from Derry, Maine are haunted as children by a terrifying shape shifting clown, but 30 years later they must return as adults to try and defeat the creature once and for all.

As far as main villains go, they don’t get much more terrifying than Tim Curry’s Pennywise the Clown; every scene he’s has the potential to send a chill down your spine, topping it off with that famous line “They all float down here” enticing children into the sewage with balloons. Using an ordinary clown’s connection with children during this horror really bolsters the scare factor Curry brings, with the children in the film being constantly afraid thus cementing him as utterly intimidating and creepy. Throughout the film be turns into a number of different creatures to represent each of the children’s worst nightmares, like an old woman or a mummy, and despite CGI not being as convincing in modern times, the fear is obviously displayed by both the real characters’ interaction and reactions.

The film begins with the main characters as adults, developing their grown up lives before delving into them as children in a series of flashbacks. These scenes of the adult versions flesh out each of the characters, developing the children further than would have been possible without this jump thirty years into the future. And this works both ways: the interaction and relationships developed early in their lives allows the adults to engage with each other easier and become great friends despite no contact for 30 years. However this is also the films downfall with the first half essentially being the exact same formula six times: they’re each introduced as an adult and receive a phone call, followed by a flashback of their own personal experience of the creature. While they’re all individually interesting and needed, they do become very predictable and once the repetition kicks in the films seems to slow down.

This adaptation of Stephen King’s It stays true to the book and delivers a horrifying villain with some great character to counter the evil; however, the length of the film and repetition of the first half is a bit of a glass ceiling and hinders it becoming a top, top great.

Is Pennywise one of your all time favourite villains? Did this terrify you on its 1990 release? Let us know in the comments.