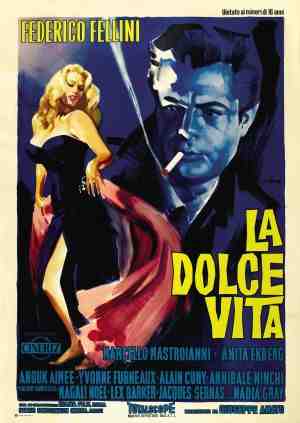 
Not much has changed over the last half century: infidelity, celebrities and nuisance paparazzi all feature in this 1960 classic.

Marcello is a journalist who spends seven days and nights moving throughout Rome while meeting friends and lovers in search of some meaning to his life. Each day he struggles to balance the controversies of a fiancé, other women, and what excesses of alcohol and depravity he can find.

Initially, La Dolce Vita presents itself as a glamorous Hollywood style film about the rich and admired, with Marcello flying across Rome in a helicopter before being found in a fancy restaurant in a tuxedo. The film quickly delves into a grimy and more interesting area of magazine journalism where immaculately dressed rich celebrities try to get out of planes or eat in public, while photographers scramble around like mad animals, against each other in the hope to get a decent photograph. This is an excellent and intriguing angle to make a film from and makes the general publics dependency on celebrity culture and news seems a rather forcefully invasive attack. Over half a century on, and it’s hard not to get a shocked response from this ever present problem especially when a woman is told of friends death while photographers relentlessly capture her reaction.

More than anything, the film offers a liberal outlook on life with the womanising journalist, Marcello, moving between groups of friends and events. His freedom, despite the apparent social norms – “Not all men are like you. They don’t all roam around,” – is a refreshing change from other safer films from this time. La Dolce Vita brings sex, nudity, loose women, prostitutes, and a general lifestyle of mayhem to the big screen, and certainly when it was released in 1960 it would have caused a huge stir.

The film has however lost some of its appeal for new audiences, with a slow pace and a seemingly never-ending freeform plot. Nothing really happens of much continuing interest; instead Marcello and his lifestyle is laid bare by the director, Federico Fellini, for the audience to interpret as they please. The separate stories fail to interlock between each other and with this being the case La Dolce Vita certainly won’t be to everyone’s taste. However, as a careful examination of the over civilised, this is a carefully constructed and interesting piece of cinema.

Offering an array of raised issues such as over zealous journalism, womanising, and debating life’s uncertainties, makes this a captivating character study, but for audiences who need a quick paced, story driven film this will be one to leave well alone.

What did you think of La Dolce Vita and do you think it’s aged as much as we do? Let us know in the comments below