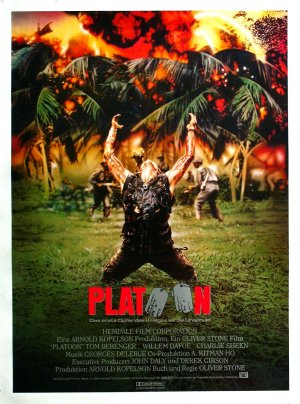 
Does Platoon offer anything new to the well-trodden war genre?

Chris Taylor enrolls for the United States military from a rich family background, but he quickly learns that it’s not what he expected and he might be in over his head.

The beginning of the film jumps straight into the action in Vietnam, showing Taylor (Sheen) as a newbie among the other soldiers, setting him as a weaker character right from the outset. This is reinforced some-fifteen minutes into the film where he thinks he’s dying after a minor wound while other men are actually dying around him. Using this, his discussed background, and a voice-over focusing on the letters he sends to his Grandma all add more depth to his character, while isolating him from the rest of his platoon. This also helps to prepare the viewer for the important switch in his attitude we see later where he stands tall and comes of age with a wartime mentality as be becomes one of the braver characters in the group. Throughout, twenty year old Charlie Sheen gives a great performance and manages to come alive when competing against other loud voices in the alpha male group.

The platoon’s dynamic is highly strung and makes for a fantastic watch and is helped enormously by a great supporting cast, including the likes of Forest Whitaker and John C. McGingly. Additionally, Tom Berenger’s Sgt. Barnes is great in the villain/cold-hearted role (he even has a scar on his face to cement his bad-ass-ness) outlined with a non-caring attitude towards his colleagues, and even going far enough to want to kill them. On the other side, Willem Dafoe’s Sgt. Elias is the least aggressive towards Taylor, instantly allowing him to become a likeable character and more importantly a friend to our lead. The film often walks the line of a thought provoking piece at how men react in a largely alpha male environment, and how these reactions differ when it actually comes down to the wire and the true characters show through, and it does this successfully, but ultimately it stays as an easy to watch story about men trying to out-man each other.

The brutality of some of the scenes is undeniable and really pushes, and sometimes even surpasses, the boundaries of immorality. This is again perhaps best conveyed with the help of Taylor’s reactions, working as a central point to engage with and relate to as the person least familiar to the barbarous situation. By threatening to kill children and with body parts flying around, it’s certainly not light-hearted, but as far as the story goes, it’s easy to follow without too much depth. Despite that, the plot doesn’t disappoint and is largely built up by the characters and their combined story.

The character transformation by Taylor is great to watch, starting out as a naive rookie in way over his head and eventually becoming a cold blooded killer that can more than hold his own, and to supplement this is a great supporting cast. Platoon has a great dynamic between a lot of different characters and handles them all superbly.