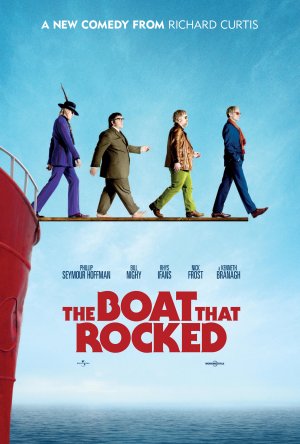 
Does this British comedy sink or swim?

During the 1960s Carl is sent to live with his uncle who is the boss of Radio Rock, a pirate radio station that is in danger of being shut down by a determined British Government.

The wealth of acting talent is staggering in this British comedy and could rival the best for modern ensembles. Nick Frost’s DJ ‘Doctor’ Dave and Rhys Ifans’ Gavin Kavanagh particularly stand out, with Frost bringing a similar confidence in his performance to many of his previous roles, while Ifans carries the role as a popular, sexy and crude DJ with swagger. Other performances to watch out for include Bill Nighy’s Quentin and Philip Seymour Hoffman’s The Count as two equally brilliant legends in this acting arena. As an ensemble, each of the characters add something special to the mix, which is only strengthened by some shore-bound characters like Carl’s love interest, Marianne, played by Talulah Riley, and his mother, played by Emma Thompson.

The British Government is very comically displayed as a cold and ruthless organisation, which is purposefully in stark opposition to the carefree rock DJ’s. The two faces of the government are Alistair Dormandy and Domenic Twatt, delivered fantastically by Kenneth Branagh and Jack Davenport respectively in a very satirical and grey world. A highlight can be seen at their Christmas dinner which is hilariously only made exciting by the bang of a Christmas cracker, before Dormandy declares it as “enough excitement for one day”.

By creating a film around a radio station there was ample opportunity to jam in some great music, and it doesn’t disappoint one bit. With a bit of everything from the 50’s and 60’s, the music played on the radio and the accompanying music in the film are appropriately chosen and keep enjoyment levels to the max. The soundtrack to this is an absolute cracker and will keep you humming the classics for days – get on it.

It's not surprising that Richard Curtis has delivered another great British comedy with romance thrown in, and despite the box office failure he's certainly created a gem once again. The great cast really makes the film tick and is definitely worth a watch for music and film lovers alike.