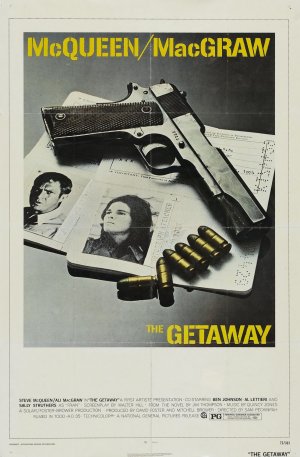 After a bank robbery goes wrong and he’s double crossed, Doc McCoy must travel to Mexico to avoid going back to prison. With the police on his tail and his wife by his side he must avoid capture by any means necessary.

It should be stated that even around its release in 1972, the premise of The Getaway was nothing special, but one aspect that makes it strikingly different is the relationship between Doc McCoy and his wife, Carol McCoy. The break down of their marriage due to an uncomfortable deal Carol made with a parole board member makes the attempted fleeing to Mexico strained for both of them, with shouting, slapping, evident frustration and quiet stares all dealt with in a surprisingly calm and restrained performance from both Steve McQueen and Ali MacGraw. This also helps build an incredible amount of tensions between the two and brings their marital conflict into the foreground just as much as problems with law enforcement.

And these problems with law enforcement are brought to the screen by the direction of action innovator, Sam Peckinpah, who used his trademarks like slow motion and extreme violence to emphasize the dangerous journey the two characters embarked on. DDeaths are delivered with large splashes of blood, shootouts are slowed down to focus on bullet holes and characters freely do shocking and terrible things like a woman having sex with a bank robber in front of her own husband and back stabbing and killing an ally. Peckinpah also helps add nail biting and shocking moments that come across as excessively cool as can be seen when McCoy patiently waits in a gun store for an attendant to wrap a shotgun, directly before he obliterates a police car with it.

The star of the show of course is McQueen, who like usual plays a rock solid masculine man. His character, Doc McCoy, is a no nonsense criminal who plans everything with precision and is forever the pragmatist no matter the situation, and this confidence in a leading man is fantastic to watch. However, McQueen shows an emotional side throughout, making it clear that prison changes a man and with McCoy struggling to come to terms with his wife’s betrayal. This adds a much-needed complexity to the character and makes him easier to identify with.

The Getaway uses a slow pace to generate a mounting tension, and with brilliant action scenes and great lead performances from Steve McQueen and Ali MacGraw it comes across as shocking and effortlessly cool in equal measure.


This is one of Matt's favourite films. Have you seen it or are you a big fan of McQueen or Peckinpah's other work? Let us know in the comments below