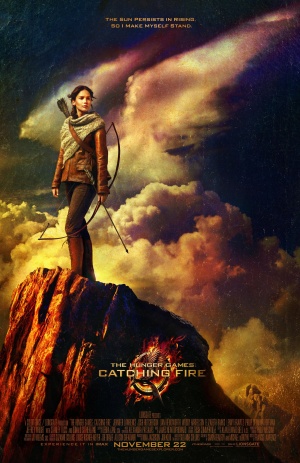 
Does this second instalment set the franchise on fire or will it burn itself out?

Riding the repercussions from the previous games, Katniss Everdeen must undergo her duties as victor while running a political battle against the powers that control the games.

This second film follows a similar structure to The Hunger Games, with a lengthy build up before a large focus on the actual games. Despite these similarities, Catching Fire is a host to improved gripping events, particularly the growing revolution displayed on the tour of the districts early in the film. As the film follows on a year after its predecessor there’s no need to revisit the character’s backstory, allowing the film to jump right into the action.

One aspect that was missing from it’s predecessor was the physical form of a real villain, allowing it to focus more on the many rival entrants however Catching Fire portrays a villain in the shape of President Snow; his inclusion helps further motivate the main characters while also setting up the film with an almost impossible task for the heroes.

Once again, the actual games the film centres around do not fail to disappoint. By not resting on their laurels, there’s even more variation of lethal obstacles and deadly forces like the poison mist and killer baboons, freshening up what is again a fairly similar plotline to the original film. Combined with a more dangerous level of entrants and politically motivated higher stakes, the thrill factor and exciting action sequences make the film a much more attractive proposition.

The Hunger Games: Catching Fire does everything a great sequel should do by building on the scene set in the first film and further developing characters. All of this combined is shaping The Hunger Games to be a stand out franchise.