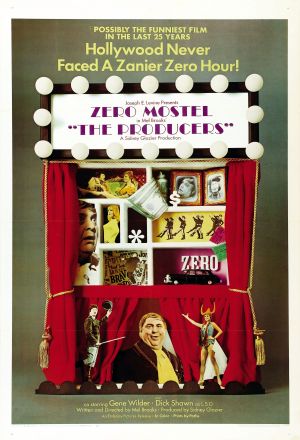 
Fraud, musical theatre and Adolf Hitler, what made such an odd mix stand the test of time?

When accountant Leo Bloom realises that with fraudulent accounting a theatre producer could make more money from a flop than a hit, he and failing producer Max Bialystock aim to create the worst musical ever in the hope of making one million dollars.

The quick and snappy pace of the film is evident from the start with how efficiently Mel Brooks introduces the two lead characters Max and Leo and uses the early scenes to show how despondent the leads are with Max debasing himself for money and Leo being stuck in a rut because of his nervous lack of confidence. Placing these forlorn leads in the underdog category makes them brilliantly endearing and gives them the audience backing even when doing creative accounting.

Because of how far modern comedy has pushed the barriers of bad taste and offensive material, this film’s edgy, close to the bone humour has been diluted from its original release in 1967. This is an unfortunate loss to the film’s strength for a first time viewer, but it’s easy to appreciate how controversial it must have been to the original audience to see a room full of singing and dancing Hitlers. The script that Brooks has created intertwines hilarious characters with a farcical storyline that, even with the loss of the originally offensive use of the Nazis, manages to hold its own against modern comedies.

The star of the show is Gene Wilder as accountant Leo Bloom and it’s easy to see why he got an Oscar nomination for his role. What makes his performance stand out is the way he quickly changes from a calm and collected gentleman to becoming a hysterical mess who needs a baby’s blanket to sooth him; this bipolar performance helps the audience focus on the two things Wilder is best at. The first is the honesty of his natural performance and the other is the neurotic and crazed base he creates many of his character on such as his memorable Willy Wonka role.

This film has stood the test of time and even got a Broadway remake due to the brilliant humour and indelible way that Wilder and Zero Mostel worked together under the directorship of Brooks.

What did you think of The Producers? Are you a bigger fan of the original or the remake? What is your favourite film that includes Hitler? Leave your comments below.