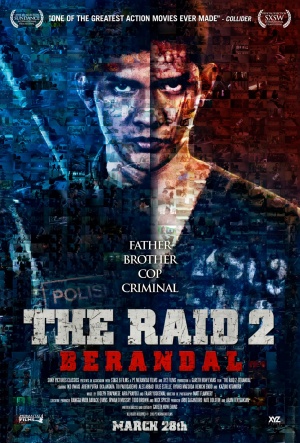 
Can Rama fight his way to success a second time around?

Rama is approached by a small organisation that prosecutes crooked cops, and to get revenge for the crimes he’s witnessed he must himself become a criminal, go to prison and infiltrate a dangerous gangster family.

This film and its predecessor seem to have won a reputation for being extremely violent and this is validated too with some scenes being rather difficult to watch due to the excess gore and in depth brutality on show; however, the amazing ability the characters offer to use their surroundings as weapons is brilliant to watch, albeit at times gruesome. Using anything from brooms to chairs, it manages to do all this without ever getting silly or comical, and usually results in a leg break or some form of damage to a minor character or extra. The film is evidently choreographed with precision and is very impressive to watch, even for non-fans of the martial arts genre. Alongside this, The Raid 2 stays true to what it is: a violence filled, heart pumping fight-fest.

A by-product of over the top action and excess violence sometimes result in a lack of story or character development, but this isn’t the case. Rama, the lead character, does a good job of staying at the forefront of events as a character to relate to – or as relatable as a kick-ass martial arts expert can be to the every day guy – without saying much of note or engaging in much conversation. Instead he impressively fights his way out of situations and sorts out his problems with a cold, hard fist, in an attempt to eventually get back to his wife and child.

The underlying father and son story at the heart of the film between Ucok and Bangun really helps add depth to the story and creates a destructive relationship that becomes a ticking time bomb from early on. Rama’s involvement in this helps bring him into the story, but Ucok, in particular, (played by Arifin Putra), as the heir of his father’s empire, is fun to watch and his unhinged performance adds a sense of danger to the lead’s welfare despite their close friendship.

The Raid 2 is action packed and extremely violent with a relentless story line and well developed characters; fans of martial arts will likely enjoy this, but there's enough for the every day film fan (myself included) to enjoy.

What's your favourite martial arts film of all time? Is this a little over the top or as good as the first? Punch your reply in the comments below (HA get it?)