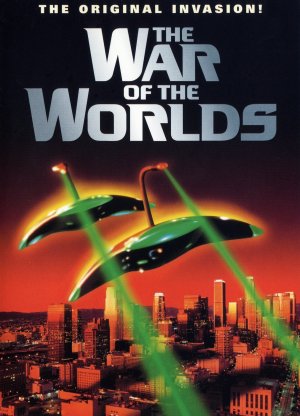 
Aliens, space and world domination in the 50′s – does it still stand the test of time?

When a meteor hits Earth, local residents realise there’s a little more going on than a large rock landing from outer space; as aliens proceed to emerge from meteors all over the world they use deadly force to try and take over the planet.

What’s certainly true for this 1953 adaptation of a 1898 novel is that the film was incredibly still way before it’s time; the film is well structured and it’s every bit as intense and unnerving as the source material. Thrown in with this is some great, but now a little dated, special effects and it’s easy to see why the film won an Oscar for Best Special Effects in 1954. Going back to the release period certain aspects would have been terrifying like the alien weapon, the ‘death ray’, especially when they reduce humans to piles of ash or completely destroy cars and buildings.

The depth of the film also never ceases to amaze; a voice over is offered on a few instances to include additional information on the aliens and their background. Giving insight into the aliens’ capabilities and physical attributes act as a helping hand, and is actually very interesting, especially when considered the film’s age and even older original material.

Early scenes in the film show some promising signs for Dr. Forrester as a lead character: he commands the screen and shows dominance and knowledge to all his peers in a group mainly made up of locals. But unfortunately once the aliens appear he’s no longer able to offer interesting theories and guidance on the meteor, he becomes a rather dull bystander with nothing to add next to the army leaders who take charge. However, later in the film he takes on more of a traditional action lead, doing everything he can to find his new love interest, Sylvia. This is quite a transformation of character, but it would have been a bit more interesting to see how he’d cope as a leading figure in the knowledge of the aliens, even after the army had rolled up – after all, he was meant to be a Nuclear Physicist.

War of the Worlds is a well structured film and does what it needs to very well: the aliens are almost believable and it creates a story that convinces; however the characters are unfortunately a little shallow to properly engage with. Sixty plus years on and the special effects are now also dated, but that doesn't take anything away from the film as a whole.