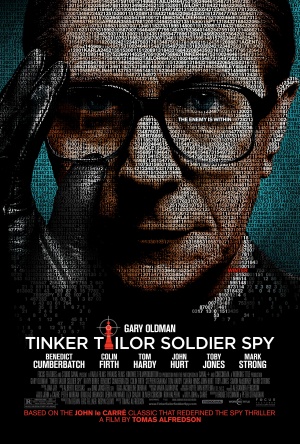 
The Cold War brought to life in this methodical thriller.

After being forced into retirement, Control gets George Smiley to investigate a mole that left an agent dead.

Tinker, Tailor, Soldier, Spy shows that British spies can be much more than the well known suave gentleman like James Bond, who kills the baddies and beds the ladies. The closest thing to smooth and suave in this film is Tom Hardy as field agent Ricki Tarr; he even gets the girl. It fits confidently into Hardy’s career between Hollywood blockbuster Inception and fight-movie Warrior as he gives a well-characterised performance with more than a nod to Bond.

He is however only one of an amazing line-up of supporting stars that range from the surprisingly serious Kathy Burke to the versatile Mark Strong, with the best of this list being the consistently fantastic John Hurt. As Control, we see John Hurt expertly play a man on the decline who desperately wants to regain his reputation even though his career is over. This small-scale aim makes him very likable no matter how far he falls.

With this quality of talent, a strong lead is needed in the role of George Smiley, a role originally played by Ben Kenobi himself: Sir Alec Guinness. To do that job is legend in the making Gary Oldman, who quietly controls every scene with an understated yet powerful performance. His best scene occurs in a meeting room when he acts opposite John Hurt, Toby Jones, Colin Firth and Ciaran Hinds; he completely steals the scene with every shot away from him becoming hard to watch.

With a great cast and grubby ambiance (in parts it’s surprising actors aren’t choking on cigarette smoke) everybody who enjoys films with a dark and realistic tone should see this.