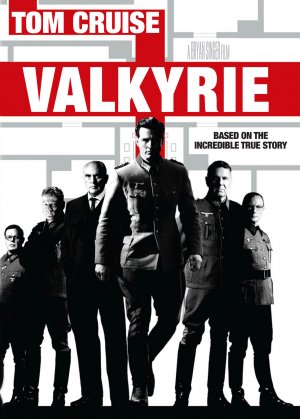 
Tom Cruise and Nazis, what’s there not to like?

After being seriously injured in an attack, Colonel Claus von Stauffenberg is brought into a group whose plan is to depose Hitler, take control of the government and discuss peace with the allies. When plotting they come to realise that their plan will only work if they kill Hitler.

Writers Christopher McQuarrie and Nathan Alexander manage to re-humanise many already established Nazi members that have been repeatedly demonised in films over the past 50 years. But it’s not just the members of the coup against Hitler that get this treatment; even the Führer himself and high ranking officials on his side avoid becoming simplistic interpretations of evil. Watching Hitler thoughtfully battle his paranoia while he works out whether Stauffenberg is an enemy or a model soldier is a great example of how these established characters appear much more real and interesting than in most films of this ilk. Some of this is down to the actors, like David Bamber, who played Hitler, and combined with clever writing the result is a fluent and thought out list of enemies for Claus and his comrades to plot against.

Tom Cruise’s performance as the injured soldier, Stauffenberg, is the strongest he’s produced since Rain Man. As Stauffenberg, he controls every scene with a calm performance that is able to be more introverted than his usual over the top action hero roles. Watching him struggle to overcome his losing of one eye and hand and missing another hand’s two fingers and a thumb shows a wonderful physicality in his performance that not usually seen by the blockbuster star. Even when he’s aggressively putting his point across to his co-conspirators he’s emotionally controlled which gives him a presence to match the high quality of his co-stars.

Of these co-stars there are two stand-out performers: Bill Nighy as General Friedrich Olbricht and Tom Wilkinson as General Friedrich Fromm. Nighy’s characterisation of a meek general works well as a counter balance to Cruise that brings a likability to Nighy’s Nazi officer. The character of Fromm plays both sides of the coup with his loyalties being unclear. Wilkinson does especially well to play both sides uniformly to give the audience a real sense of unease about his actions. The scene in which these two actors and Cruise share the screen, when Fromm is being asked to join the coup, is a wonder to behold as they bounce off each other to keep the intensity of the scene high.

This is a must watch for those who like political thrillers as this true story delves into a part of history that most people in allied countries wouldn’t have ever heard about. This could also be one of the best films of the last ten years for performances with every single actor being pitch perfect in their characterisations.

How do you rate Tom Cruise’s performance? What is your favourite movie depicting World War II? And in your opinion which actor deserves plaudits for their performance in Valkyrie? Let us know in the comments below.