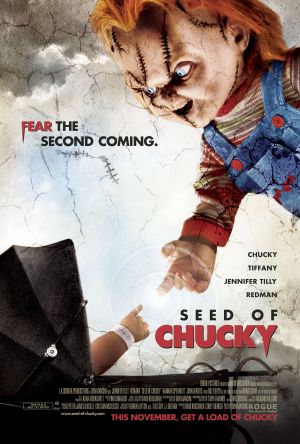 
How does Chucky cope with parental expectations and an indecisive partner?

Glen/Glenda is a genderless British doll who hunts down its parents, Chucky and Tiffany. United for the first time, they come up with a plan to gain human form and become some of the most popular people in Hollywood.

Seed of Chucky opens to a self-conscious and friendly teenage British doll, who works at a circus as part of a ventriloquist act and poses the question, ‘did I miss a film??’ While his character does eventually offer some fairly funny moments towards the end, the opening forty minutes of confusion isn’t an acceptable build up to a half-decent ending. Right off the bat, the film just doesn’t make sense and causes unnecessary questions rather than setting foundations. This is especially encompassed by Chucky and Tiffany not being introduced as animated puppet characters until after the confusing and lengthy opening, by which time it’s a little late to salvage the entirely new and unexplored characters.

Following suit, a few scenes later we’re introduced to the real actress Jennifer Tilly as herself, an actress craving attention and doing anything necessary to be involved in big films; however, there’s one issue with this: she also played the human form of Tiffany and voiced the female doll in the previous film. Thrusting her into the early scenes causes incomprehensible confusion and again backs up the growing worry that something has been missed between films. This is never explained throughout, and isn’t even acknowledged until late on when it shoehorns in some humour with Tiffany the doll (voiced by Tilly) idolising the actress, Jennifer Tilly – “I know, she sounds just like an angel.”

It’s obvious in some scenes that the creators have taken a leaf out of the general spoof film, especially Scary Movie 3 the year before, and the wealth of largely unfunny spoofs in the Naughties; this includes a movie set early on titled ‘Chucky Goes Psycho’, creepy stereotypical news reporters, and even a scene where they kill Britney Spears. While the Hollywood outlook is an interesting change of scenery to the franchise, it’s mostly quite cliché and predictable.

Unfortunately, Seed of Chucky doesn't take itself serious enough as a slasher film to build on the franchise, instead creating a sometimes humorous, but largely idiotic follow up to Bride of Chucky. A disappointing sequel to an optimistically great previous film.

Do you agree that the franchise has taken another turn for the worst? Let me know below.