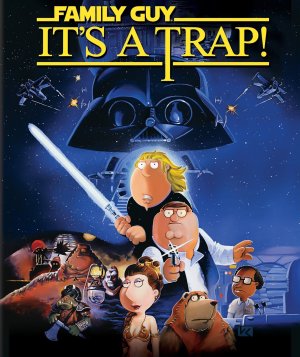 
What’s new in this third installment of the Star Wars/Family Guy crossover?

Peter Griffin finishes the story of Star Wars in his own way after being forced to by the production company.

It’s a Trap isn’t as fast in pace as Something, Something, Something Darkside and the addition of Family Guy’s usual cutaways, like watching a performance of real life country singer Conway Twitty, doesn’t help keep pace. The longest joke that slows the film to a crawl is the nodding sequence above the sarlacc pit, which feels like it lasts an entire minute and only consists of different characters nodding. Even the shorter cutaways last longer than the previous instalment’s managed with the storm troopers pillow fight with the Ewoks taking more time than appears necessary. These longer cutaways don’t mean there aren’t moments of comedy gold with the cutaway of the advert for Han’s employment company Han Jobs hitting just the right note of smuttiness and stupidity.

A slower pace could also mean character development might be improved however this isn’t the case here with most of the new characters being two dimensional, and this isn’t just because of how they’re drawn. Characters from American Dad and The Cleveland show bump up the character roster but even with Family Guy cast members running low Meg still doesn’t get given a proper role. Even though this carries on a running joke of her being dismissed by her father continuously, it would have been interesting to see her as another hated character to alter the joke. Including her as a bigger role like Jabba the Hutt would have still kept the same type of joke running but have given her a disgusting and undesirable angle.

Overall this films plot doesn’t feel as original as it predecessors, and could be partly down to the source material, Return of the Jedi, having a lot of repeat ideas with a second attack on a Death Star and a Vader/Luke light sabre fight. However it’s not just the repeated Star Wars sourced sequences that feel old; the joke about all Seth MacFarlane voiced characters hating Seth Green also becomes repetitive and loses its novelty.

Sporadic funny moments that are few and far between, a lack of coherent and interesting new characters and a failure to expand on the trilogy’s potential make this episode the worst of the franchise.

Would you like to see them adapt episodes 1,2 and 3?