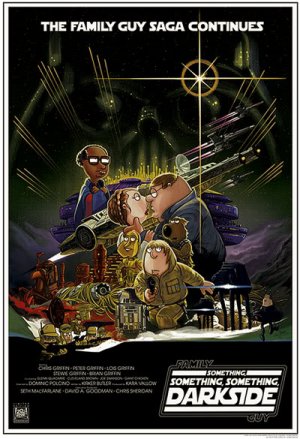 While experiencing another blackout the Griffins continue the story of Star Wars with Episode V continuing Luke and the other rebels battle against the Empire.

Expanding on such a fan hit was always going to be difficult and just like George Lucas managed with the original, Seth MacFarlane improves on the interesting world he created in his the first episode. One of the ways MacFarlane improves on Blue Harvest is the use of in jokes to the parent franchise, whether that is making one of the AT-ATs pregnant or Han being even ruder to Leia after she says she love him when being frozen in carbonite. These seem like the writers having some freedom to really engage with their knowledge of the original trilogy and are not being restrained as much by the worries of whether what they are creating will be accepted by the public as they have its predecessor to give them confidence.

One improvement from the original Star Wars as how much more interesting this Luke is than Mark Hamill’s version. This is due to the fact that Chris Griifin’s version of Luke, voiced by Seth Green, can be cherry picked from all Luke’s most important and exciting moment as well as mixing in Chris’s stupidity for comedy. These of course have been given the Family Guy’s makeover with his Jedi training scene now becoming a Rocky moment as it is now intercut with Ivan Drago in his gym.

After making Family Guy’s only major black character play R2-D2 the character casting of Lando Calrissian was always going to be difficult. Perhaps not bizarrely for Family Guy they decided to black up a white character and amazingly it’s not offensive to see a black Mort Goldman. They managed this by having other characters say offensive comments that detract the audience’s attention away from the seemingly unacceptable blacking up of a white character, therefore making the audience more comfortable with Mort as Lando.

An improvement on its predecessor with more inappropriate humour and smarter in jokes, certainly the way the franchise wants to go.


Do you prefer this to its predecessor?