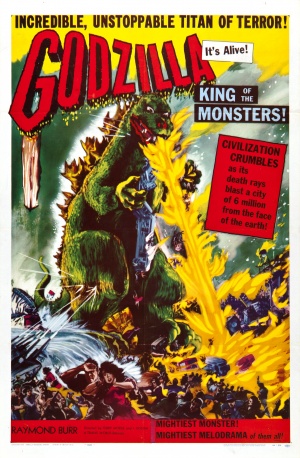 
How does America’s first take on the growing Japanese franchise come across?

Steve Martin, an American reporter, finds himself in the wrong place at the wrong time in Tokyo. When ships start to get attacked and burst into flames in strange circumstances, Martin starts investigating the happenings at his own peril.

As with seemingly many films from the fifties, this begins with a strong voice over introduction from the lead, Steve Martin (Raymond Burr), which allows the film to pick up pace and jump straight into the action of our lead being trapped under fallen debris and with clear injuries from recent events. Past this, the film is largely a flashback and does a good job of developing Martin’s character as a strong and commanding leader – an important feature when up against such a colossal opponent. He does well to control most of the scenes and events, despite lacking an understanding of Japanese and being surrounded by Japanese people; the scenes with Martin included are the human highlights of the film as he offers a relatable beacon amidst a large amount of distant politicians and scientists.

The intensity and fear provided by Godzilla stands the test of time fairly well, and even though it’s not that convincing as a monster in the twenty-first century, it’s the scenes where the creature is not visible that are most effective. The creators use strong winds, fire, and startling noises to build frightening atmosphere around the unseen monster. Even when the creature is finally visible and in a confrontation with the Japanese army later in the film, the previous scenes have set it up enough so that it still comes across as a terrifying and unstoppable beast, even if the obvious man in a suit and miniature building combination haven’t passed the test of time particularly well.

Interestingly, Godzilla, King of the Monsters! is shot in almost a documentary style; making use of a fairly regular voice over from Martin himself. This allows the unrealistic events to come across more convincingly in its matter-of-fact style and with a large amount of faceless extras and only a handful of key characters, the story benefits from this grounded approach, especially in such unlikely and far-fetched situations in comparison to the real world. It’s this side of the film that perhaps offers early inspiration to more recent disaster films like Cloverfield.

The early build up to Godzilla himself is fantastic and does a really good job of creating a scary monster, however when the creature is introduced it's more funny than scary decades on, as would have originally been experienced.