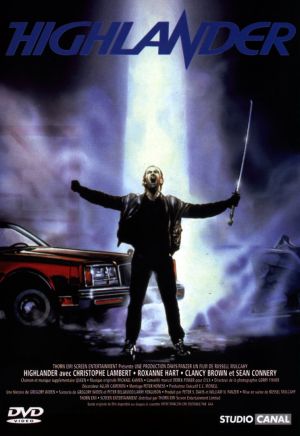 
The Highlander is immortal but can this 80s movie survive the passing of time itself?

When a Scottish warrior learns he is immortal he manages to stay undetected for centuries until a previous enemy confronts him in New York to a fight to the death. These two are the last living immortals and whoever survives will gain the mysterious and unknown ‘prize.’

Queen’s Princes of the Universe and a glitter filled screen of boxing opens the film and firmly places it in its appropriate decade, the 80s. The 80s New York setting looks aged due to clothes and haircuts but more so due to its primitive ability at conveying both action and emotion. Characters are summed up by careers, weapons and in one case ethnic origin and action is short-lived and too eager to use lightning special effects at every opportunity. Obviously this film is restricted to mostly sword fighting but choreography and direction don’t seem too impressive when compared to exciting and/or tense sequences as seen in Return of the Jedi and Conan the Barbarian a few years earlier.

Highlander makes good use of flashbacks to Scotland years before however, bringing Connor MacLeod’s mysterious past to light through segments interlocked into the main current day narrative. In fact, the sixteenth century Scotland storyline is by far more interesting than the 80s set situation where the wiser MacLeod in America is much moodier and serious than the kilted jolly hero in his native Scotland. This becomes apparent with his more believable Scottish love interest, Heather, with them both being supportive, innocent and generally engaging to watch. What’s more, the flashbacks release Juan Sanchez Villa-Lobos Ramirez unto the world, a bizarre Egyptian character played by Sean Connery. His ridiculous Spanish costumes, stories and erm, thick Scottish accent are bypassed by Connery’s confidently absurd presence and it’s a real shame he wasn’t included in the modern day setting.

But if Highlander has one major downfall it’s a lack of coherent and engaging story. We’re told early on the immortals will one day fight to the death and that the last remaining will win the ‘prize,’ but without any explanation of what that is and a two dimensional evil villain (he wears punk clothes and has a dark voice) the film relies solely on the flashback scenes to create excitement for a viewer to continue watching.

Highlander’s flashbacks are by far the strongest aspect of this cult movie but the mysterious main storyline ends up lacking much interest and fight scenes are disappointing at best.

Highlander is an eighties classic but do you think it stands the test of time? Let us know in the comments below.