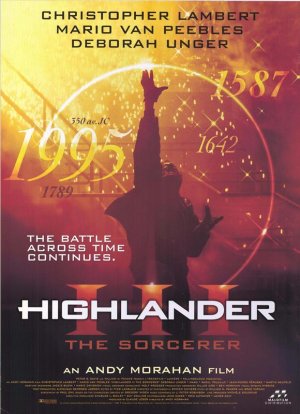 
MacLeod is back in New York, he has a sword and even has an immortal to kill, anything new to add, Highlander?

When a dangerous immortal, Kane, is released from his prison of four hundred years, he seeks vengeance on the last immortal, Connor MacLeod. MacLeod must leave his new family and return to New York to face his dangerous opponent.

First off, this is a return to Highlander roots with Connor back in New York in a similar setting (not the abstract future like in The Quickening) with the film taking place directly after the original. This is shown to be a strength in this instance as it embraces current day (1994) costume and music and builds on the last film’s more coherent story structure with multiple events happening at any one time. MacLeod must stop the new villain, save his son, fall in love, and have a jolly time with his new missus. The story also returns to the original’s main strength: flashbacks, but chooses to explain an old love interest instead of giving us any further insight into the lengthy origins of MacLeod himself. Yes, this love story tells us of his past, but for an action based film series it fails to include any additional insight into the character or major conflict (the French Revolution is scarcely mentioned let alone shown.)

Current day fight sequences are improved once again with MacLeod and Kane’s sword fights being the most exciting of the series to date, minus a bizarre scene of them swashbuckling and swinging on a pair of trapeze. The end scene takes its look heavily from the Terminator 2 finale but is made more interesting than previous Highlander fights due to the villain’s mystical vanishing ability which means the sequence doesn’t become one drawn out fight sequence; instead MacLeod has to keep finding Kane and this makes it infinitely more tense. Non-stop action isn’t always best when sword fighting is involved.

MacLeod, played by Christopher Lambert, is the same old grumpy character although he does now smile on occasion when meeting old friends. The big change is that he’s adopted a child, John MacLeod, who’s used to draw MacLeod to New York to meet Kane. This would seem reasonable if MacLeod hadn’t left his son in Morocco to fight Kane in New York to begin with. Instead, MacLeod doesn’t call his son at all, flies to Scotland to make a sword and is followed by his new love interest as they start a honeymoon period away from danger. He’s certainly not the best Dad in the world and this interlude of romance is given way too much precedence, especially as its reiterated in the flashbacks as well. Get to the action already.

The Sorcerer builds on what the last two films had to offer and arguably creates the most coherent and engaging film of the series to date. Love interests are overdone, but fight scenes are mostly impressive and the film's villain is a decent match for MacLeod.