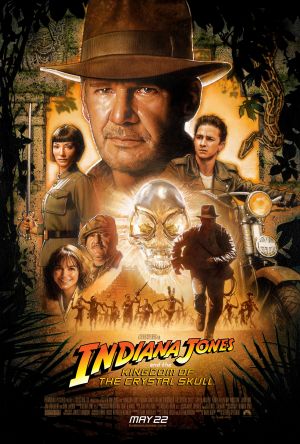 Indiana Jones and the Kingdom of the Crystal Skull (2008)


It’s been nineteen years since an Indiana Jones film. Will this be a true Indiana outing or a terrible knock off adventure?

In 1957, Indiana Jones, along with old flame Mary Williams (originally Marion Ravenwood), her son Mutt and Indy’s colleague, Professor Oxley, are kidnapped in Mexico by the Soviets and become embroiled in a plot to harness the power of an ancient artefact: the Crystal Skull of Akator.

Kingdom of the Crystal Skull can be best summed up by its opening in the Nevada desert: the driver of a sports car is coaxing the lead driver of an army truck convoy into a race. This sets the film up for a great opening much like the adventure packed intros which kick off the previous films, however, unfortunately nothing happens. This disappointing action runs through most of the film with a lot of exciting sequences which lack any real conviction or consequence.

No real conviction is also the problem for Shia LaBeouf’s greaser character Mutt Williams, with his leather jacket and lack of personality, LaBeouf spends most of his time compensating for being completely miscast by shouting and being aggressive at all the wrong points. He struggles with this type of character because it is so far from what he is best at which is being the unlikely smart/geeky hero; he certainly isn’t a hardnosed, dumb motorbike mechanic.

Even for a film that is almost destroyed by some extremely obvious plot twists, it is saved by Harrison Ford and John Hurt. Ford’s Indiana Jones is now older and has taken the linguistic sharpness that came to the franchise with Henry Jones while John Hurt plays Oxley’s madness with a soft understanding and truthfulness. Combined, their scenes are the silver linings on a monsoon of mediocrity. In particular the scene in the tent, where they discuss the history and mythology behind the crystal skull, is a wonderful excursion from relentless action scenes in which their performances are bettered by each other.

This film proves that sometimes it is not a good idea to visit the past; this is an Indiana Jones film, but to be honest, only by the skin of its teeth.