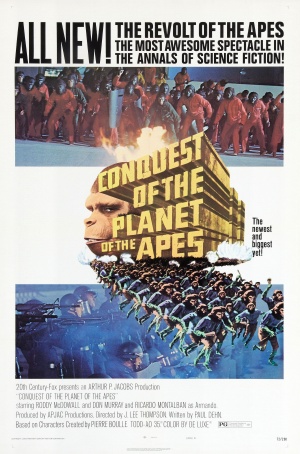 
Does this fourth film allow the franchise to conquer the Sci-Fi genre?

The child of two talking apes, Caesar, starts a revolution after humans stop using apes as pets and begin enslaving them.

An introduction highlighting the twenty-year gap since the death of the previous films’ two talking apes really builds excitement to move the story forward. The ape child that was presumed dead then breathes life into the franchise and rises above expectations with the continuing story being justified by this new intrigue. He’s an interesting addition to the franchise and a new character to get behind; with this the story tries to take a new revolution-style direction but stays true to the previous story.

Despite being set in a city like its predecessor, the film actually resembles the first two films more, with similar visual effects and a stripped back story. A corporate villain could have easily been introduced to Conquest, but instead the director, J. Lee Thompson, focuses more on human nature and how it inevitably boils down to the necessity of a food chain. This really helps the film maintain focus and direction, while somehow portraying the humans as ‘baddies.’ Maybe we’re all in denial of our own barbaric nature?

The story develops with a small cast that provide a limited window into the world, which is disappointing due to the world changing scope Caeser’s actions are taking. In the process it seems to ignore a few plot holes like when Caesar casually mentions other apes around the world revolting when he sees what apes had done in one city; this is odd as we’ve already been told he’s the only talking ape on earth and standard apes don’t stand up for themselves until told. Even though this does distract from an average and non-climatic ending, it stays true to its story and for all its faults sets up the future of the franchise for excitement.

Conquest of the Planet of the Apes is a necessary film in the franchise to progress the story however the story lacks the foundations and commitment needed with some shining plot-holes and a dull climax, limiting it from becoming one of the best in the series.