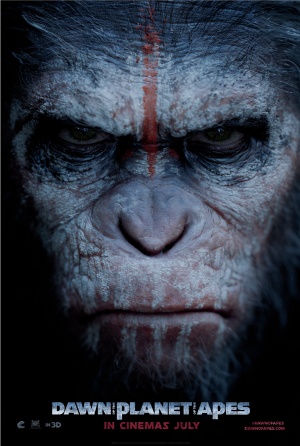 
Does Dawn dawn a new beginning for the revitalised franchise?

Ten years after the outbreak of the Simian Flu the human race is on its last legs; to get more fuel and power from a nearby dam they must make peace with a colony of intelligent apes, but there’s a mutiny amongst the apes that could spark war.

A large portion of Dawn of the Planet of the Apes is used to build up a knife-edge tension between the races, but it’s Caesar’s character and his experiences from the first film that keeps it all together. Andy Serkis’ involvement as Caesar stands out from other CGI characters he’s played before (like Gollum in the Lord of the Rings franchise or King Kong) as his character is allowed to be explored further rather than remaining fairly two-dimensional; he certainly deserves all the praise that heads his way. Caesar fantastically controls every scene with his dominance over apes and humans alike, while still remaining endearing through his wise and good-natured love for family. This version of Caesar is very possibly the best character in the history of the long running franchise.

There’s absolutely no denying how incredible the apes look and how far this goes to bring the film to life; many say that a good film will always shine through no matter the age or visual quality, but this is a perfect example of when those wow factor visuals make it even more enjoyable to watch. Incredibly, the apes never seem like they’re born from CGI and some of the lead apes in particular really let you into their world through their believable emotions, mannerisms and personalities.

Unfortunately, it’s the humans that lack a connection with the viewer that was present in the previous film; besides a bit of conversation about a daughter and a wife that died, it lacks conviction in selling these humans as the side to root for. In fairness, a lot of the story is built up around conflict between the apes themselves and the apes versus humans, but more often than not you may find yourself hoping Caesar and the apes achieve their goal. Oh, and it doesn’t hurt that they carry around an adorable baby monkey for a lot of the film.

Dawn of the Planet of the Apes brilliantly plays up the tense relationship between humans and apes, and equally the inter-species tensions when reduced to scarce resources. It doesn't quite beat the previous film, Rise, due to the lack of human relationships, but excels in developing the franchise and does well to set up further instalments.