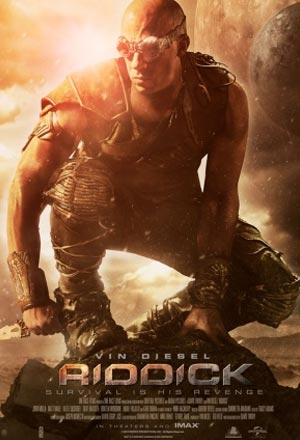 
Will the third in the Riddick franchise light up the Box Office?

After getting abandoned on a deserted wasteland planet, Riddick activates a beacon which draws two spaceships: one with a group of mercenaries with a link to Riddick’s past and the other with a group of bounty hunters after his head.

In the opening scenes Riddick is seen fighting for his life against various alien animals while nursing his leg injuries. This isolation makes the continued narration from Chronicles of Riddick all that more important and helps drive the slower paced earlier scenes. The narration also adds much needed clarity to what is a fairly unexplained opening resulting in an entertaining mini movie of Riddick’s struggle. With the help of a narrated flashback joining his position from the end of Chronicles to this point, the opening of Riddick is gripping and is a great display of our antihero’s survival instinct no matter the scenario.

The story is slow paced and suspenseful, allowing the characters to interact and more importantly develop as Riddick toys with the two ship captains and their crew in a style associated more with Batman. Throughout, the filmmakers build an aura that something is about to happen – when this arrives with an epic storm the story kicks up a gear into an action packed race to get the necessary parts for them all to leave the planet. The change in pace is necessary to build up to a finale, but unfortunately the scenes following this have almost identical similarities to the first film’s plot and show a lack of imagination.

The two ship captains are completely different, with one resembling an off-the-cuff space pirate, while the other being a respectable ex-military mercenary. While the wild card bounty hunter, Santana (Jordi Molla), is an interesting and care free character, Johns (Matt Nable) is the complete opposite as an uptight un-engageable soldier – both constantly squabble which makes for entertaining viewing for the audience. Further more, the link between Johns and Riddick is thrusted at the audience, spanning back to Pitch Black – unfortunately, this doesn’t have the intended impact due to poor character arcs from the first film.

What’s certain is that the third instalment holds more similarities with Pitch Black than The Chronicles of Riddick and unfortunately one of the major weak points is the plot repetition from Pitch Black. However, where repetition in story dampens excitement for the climax, this is all but cancelled out by the intriguing three main characters and their conflict between each other.