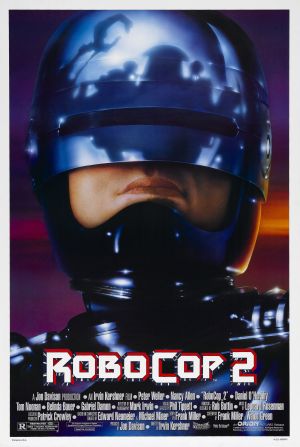 
“Even in the future of law enforcement there is room for improvement.”

With a new drug on the streets that’s consuming the city and a corporate government takeover putting jobs and the welfare of the people in jeopardy further, Detroit looks set to perish; it’s up to RoboCop to battle the criminals and uncover a hidden enemy that is far more powerful than he is.

RoboCop 2’s opening shows this as a much more traditional action film than its predecessor. RoboCop versus men with rocket launchers make for entertaining viewing and it’s just a glimpse of what’s in store; futuristic EMP guns, police raids, urban warfare and RoboCop on a motorbike are all on offer, but what’s more impressive is the cyborg villain that outmatches RoboCop on fire-power and strength. Reminiscent of superhero films post X-Men, RoboCop 2 is a pioneer of the large final sequence battle and gives enough diversity, whether that is fighting in a lift, falling off a building or having a failed police shoot out, to keep even the most distracted viewer occupied and entertained.

In a change from the original, the sequel has more focused and prominent criminal activity with Nuke, a new drug on the street being distributed by a dangerous drug pusher named Cain. He’s a fantastically quirky villain and is a great contrast to the uptight RoboCop, due to his calm demeanour and vibrant personality. Cain’s villainy is revealed brilliantly due to odd messiah references to his own life, and a deep-rooted love of violence that pits him clearly against the morally correct RoboCop. A short teenage boy is Cain’s right hand man and is seen doing drug deals, threatening police officers and shooting cops and is great humorous inclusion due to his Bugsy Malone-type deliberately misplaced casting, but also unnerving as a character due to his violent tendencies with Cain pushing him more and more into the gritty and violent world.

This sequel sees RoboCop’s past life explored further and includes some flashbacks, but more importantly sees him dealing with his current situation. He drives past his wife’s house and even has a confrontation with her that is intervened in typical RoboCop fashion by lawyers pursuing corporate interests. Unfortunately, these scenes aren’t particularly convincing due to the use of generic lines and RoboCop’s limited ability for compassion, but the film manages to create enough interest elsewhere to cover for this downside.

RoboCop 2 delivers a great sequel and although it may be a lighter and more action concentrated film, it still delivers a wealth of violence and fun that is unique to the franchise’s theme of capitalist satire.

Did you think the sequel to RoboCop was a highlight of the franchise or did it fall flat on its metallic face? Let us know in the comments below