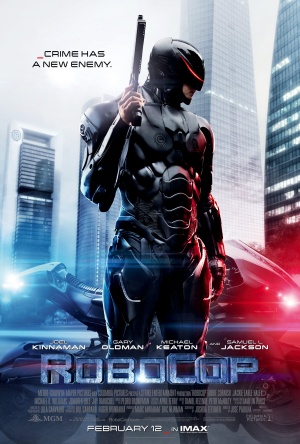 When police officer Alex Murphy is left almost dead after an attempt on his life, a military arms corporation called OCP takes his body and turns him into a combat machine. What they don’t know is that his near death experience still haunts him and that he poses a threat to the company’s very existence.

The biggest difference about this remake in comparison to the 1987 original is its step towards a more serious narrative with bold humour and brash characters being overtaken by subtle satire and serious themes of capitalism gone mad. Samuel L. Jackson plays Pat Novak, a TV presenter who speaks for the right wing American with bold statements such as: “has the U.S. senate become pro crime?” He plays a decent role as an aggravator and helps show Alex Murphy to be effecting a bigger decision on drones being allowed in the U.S. But, although this has been pulled off effectively, the remake has lost a truly unique selling point in the lack of outrageous extremes of mockery found in the previous films that would have certainly set it apart from its competition rather than fit into the action film modern trend of becoming very serious.

Alex Murphy, played convincingly by Joel Kinnaman, is portrayed as a funny and caring father before his transformation and more importantly he doesn’t lose all emotion when he becomes RoboCop. Allowing this creates great moments of empathy for the viewer, a stark contrast to the previously indifferent character, especially when he’s shown the mechanical parts of his body with only his human lungs and head remaining. What’s more, he’s actually called Alex Murphy throughout, has his entire face is on show for the majority of scenes and can actually have an opinionated, emotional agenda, thus making him a much stronger device for storylines and a much more interesting individual to root for.

RoboCop’s physical abilities are increased with lightning quick reflexes, a huge jumping ability and an agile black motorbike to match. This makes fighting villains much more action packed, although the continual firing and apparently unbeatable state of the lead makes these scenes quite repetitive towards the end. However, this is made more engaging with RoboCop accessing CCTV footage and a criminal database at whim, allowing him to target criminals and their associates quickly. This is fun to watch, quickens pace and is also another clever but uncomfortable nod to a scary future totalitarian state gone mad with eyes always watching.

RoboCop is a bold step away from the beloved film of the late eighties and does well to keep a balance of light hearted action, intriguing futures, current politics and engaging characters, but its failure to deliver on the previous films extent of dark comedy loses it a selling point that would have made it clearly stand out from the 2014 crowd.