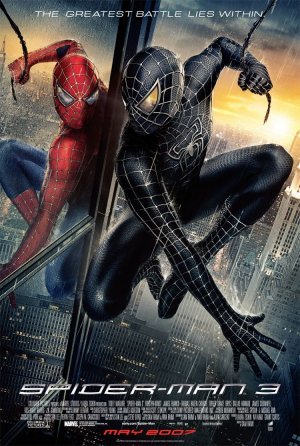 
We see Sandman and Venom in this third instalment, but will they be enough to give Spider-Man a real challenge?

Spider-Man is needed once again to save New York City against the threat of a new type of enemy: himself. When the Venom Symbiote attaches himself to Spider-Man, Peter Parker needs to take control of his life, while attempting to defeat the Sandman.

The villains in this outing are more supernatural and prove to be a welcome addition allowing space for the visual effects and CGI to impress especially in the transformations of the Venom Symbiote and Sandman. When compared to the more realistic Green Goblin and Doc Ock in the previous films, these two combine to create a genuine threat for our hero, with Sandman seemingly undefeatable and Venom able to create a villain from anyone, as seen when Spider-Man and Peter Parker become vain and cocky, almost becoming evil himself.

The new role of Parker hosting the Venom Symbiote allows Tobey Maguire to show off his acting skills – and it’s about time. With an air of over confidence and cockiness, he humorously adds a brand new element to his character; even though his overtly confident displays gets a little cringe worthy at times it never loses its humour and is massively overdue for Maguire and Parker. This is most memorable when he struts down the street clicking his fingers and dancing, which is particularly startling when compared to his normal shy and reserved self.

As well Parker’s Venom induced flaunting, he also gains a new romantic link in Gwen Stacey. While fuelling a jealously conflict with Mary-Jane, it also adds another side to Parker and Spider-Man where the hero is seemingly getting all the women and attention – a stark difference to earlier in the franchise. His personality is shown entertainingly to be both an unknowing flirt and a confident romantic depending on which part of the film you’re watching but since the first line of the original Spider-Man, Parker has battled to get Mary-Jane; this background build up allows the audience to always want Parker to succeed with the ladies, even though he’s a huge douche to Mary-Jane in the film.

With some very welcome changes to Parker and a much more impressive villain duo, Spider-Man 3 has reinvigorated the franchise and given Spider-Man lovers a reason to cheer for the webbed hero again.