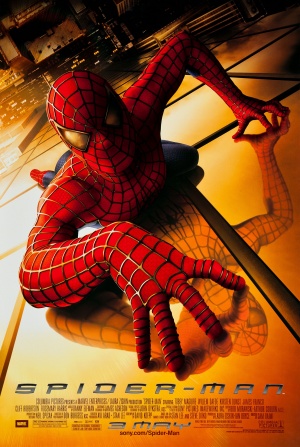 
Can Spider-Man kick-start the franchise to swing it with the best of the best?

When high-school geek, Peter Parker, is bitten by a genetically engineered spider, his DNA makes him part-spider and part-human. Fuelled by his uncle’s death, he seeks justice for the inhabitants of New York, but must defeat The Green Goblin to keep his loved ones safe.

Parker’s transformation from geek to hero is clear and enjoyable to watch from the get go with obvious changes in physique and more subtle prompts like the vulnerability of Mary-Jane Watson; the film-makers make no bones about the importance of Parker and Spider-Man as two separate characters, creating an interesting change for our hero throughout the film. Combining both a death close to his family and a powerful villain that intertwines with Parker’s everyday life, they act as an important catalyst for our hero’s change and his quest for justice. This also places more emphasis on Parker as a superhero and makes the two characters as enjoyable as each other.

The film does have some minor plot holes however but these are not developed far enough to not slow pace to a halt or cause too much confusion; this is best outlined in a touching scene towards the end where Mary-Jane opens up to Parker, “You’ve always been there for me, Pete”, but this appears to conflict with the films set up where he has never been there for her, and they’ve only been friends for a few months; before he was only seen as an outcast while she hung out with the popular crowd. Despite maintaining pace, these small blips cannot really be ignored in a film that had such a large impact and kicked off an extremely successful franchise.

Unfortunately, when compared to other superhero movies, Spider-Man doesn't pass the test of time particularly well, but this is largely down to its positives. It's shot itself in the foot by being one of the first major superhero movies, paving the way for all the giants from the comic world (sometimes literally) to stomp their way through, and improve on what Spider-Man first managed to achieve.