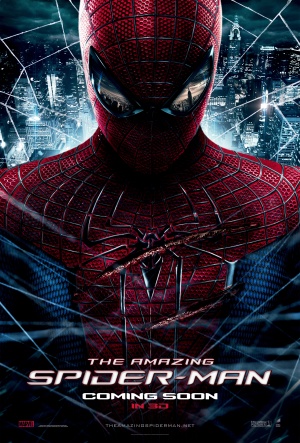 
With a franchise reboot and a new casting of Peter Parker at the helm, will the new instalment spin a greater web than the 2002 original?

After a genetically enhanced spider bites Peter Parker, he gains special arachnid abilities like web slinging and lightning fast reflexes. Fuelled by his Uncle’s death he goes in search for justice and must protect New York City from a sewer dwelling half-human, half-lizard.

The film starts by covering ground that was laid down by the original Spider-Man but it avoids repeating the style and character insights of that film. Thanks to some early scenes of Parker as a child and some flashbacks with his parents, The Amazing Spider-Man tries to develop more of a backstory for Parker, rather than depending on an awkward crying teenager to gain the backing of the audience. The opening takes a while to finally get to the transformation, slowly working its way through Peter Parker’s backstory. This insight helps connect with Andrew Garfield’s Parker, especially since many fans of the franchise might still be fond of the previous Tobey Maguire depiction.

One of the main criticisms of the previous trilogy was Maguire’s lack of personality at the helm; however, Garfield’s Parker brings a whole new character to the screen, miles away from Maguire’s awkward and geeky lead character. Parker is now fairly cool, skateboards everywhere and lies his way into Oscorp, but still has odd glimpses of impressive scientific knowledge associated with the character. This charismatic upgrade is certainly a change for the best, even if he does come across a little cocky at times.

Stylistically, we also see a whole host of changes, particularly in the remarkably stunning and overtly cool POV shots of Spider-Man swinging around the city. It’s these kinds of changes that bring the viewer closer to the main character, as well as Parker’s decision to tell a selection of the characters that he is Spider-Man; this importantly allows him the ability to open up to them and adds another layer to the webbed lead, allowing more engagement between characters, rather than the previous Spider-Man alienating himself and his identity.

To restart a popular and fairly recent superhero franchise was a brave move, but it's certainly paid off. Now with more personality than ever before and a more realistic Spider-Man, the franchise reboot is definitely swinging in a winner.