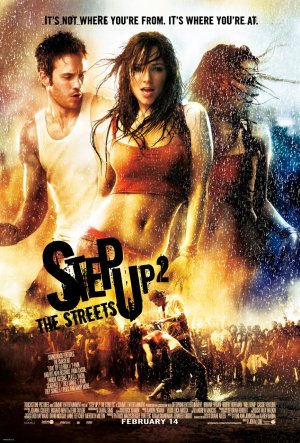 
Will this sequel step up it’s game after losing its two lead actors?

Andie attends a dance college to stay with her dance crew in Baltimore, but when they hear she’s been attending college and skipping rehearsals they kick her out and ignore her. In retaliation she collects an unlikely group of students to rehearse with before the well-respected dance competition, The Streets.

The film is introduced with a masked group dancing on a subway train and is recorded and spread online. Oddly this is seen as a serious crime, perhaps even a terrorist attack in its severity: “The notoriously allusive 410 has claimed responsibility for this mornings attack.” Step Up 2 is obviously trying to sell its authentic street-cred roots, but dancing on a subway isn’t at all convincing and instead makes the streets aspect rather farcical. What’s more the difference between the ‘street kids’ and the usual prim and proper dance college attendees is minimal and it’s hard to separate between the two, except that the street kids are mostly selfish and big-headed idiots. Surely not exactly what the filmmakers intended.

Channing Tatum’s character, Tyler, from the original is shown having a dance-off with the lead character, Andie, in an early scene and this perhaps highlights one of the main weaknesses of The Streets; it lacks a strong lead personality and wow factor dancing. Andie lacks the charisma, additional complex drive, and physical athleticism of Tatum’s Tyler, who was a lazy, but believable delinquent struggling with community service. Both of these aspects are combated to a degree by having a larger core cast with a range of personalities that come alive during surprisingly funny conversations.

Unfortunately, the film’s plot has moments of disappointment also, especially a melancholy section where Andie is harshly disciplined that just doesn’t make any real sense. This generic lull before victory may have worked if it had any logic applied to it at all but instead the audience is expected to be dumb enough to not see it, and enjoy the movie. Not something that’s greatly appreciated by anyone.

The film does have its plus points though, creating a crew is an interesting addition to the franchise and replaces the two main romantic leads found in the first film. The introduction of members even comes in the stylish form of an Ocean’s Eleven-type montage to show off each member’s personality. This works particularly well in the final dance segment where groups dance in unison and separately, avoiding any majorly dull moments despite the long length of some routines.