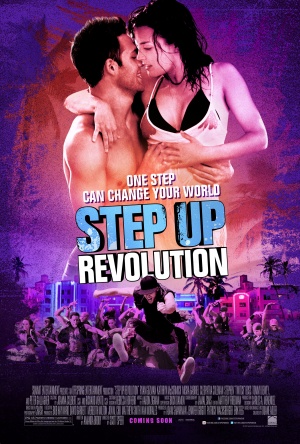 
Revolution follows the same Step Up formula but makes its own distinctive mark on the franchise.

When a rich hotel owner’s daughter meets a Miami dancer involved in The Mob, a dance crew specialising in viral dance videos, she quickly wants in on the action. But when her father decides to build over The Mob’s rehearsal space and their homes, things get personal and she’s unsure of where her loyalty lies.

Although Revolution is a Step Up film and follows the generic privileged-rich girl-meets-broke-male-dancer routine, it sidesteps away from what we’ve seen before. The first difference is the Ocean’s Eleven feel to parts of the film – something that was briefly used to describe members of crews in 2 and 3, but is built up much more here. The crew work off blueprints to infiltrate dance spaces, checking entrances and escape routes in a very organised and over the top way. Although this lacks much originality it does work to a degree, and should entertain, especially for the young audience it’s aimed at. What doesn’t work so well is the insistence this franchise has with the allusion of hardcore dancing criminals. One of the dancers at one point says: “The Mob is not for you. What we do is dangerous.” But it’s sort of not. At all. The same can be seen here as in the second film, that also used viral videos, with both films ‘illegal’ and ‘dangerous’ elements making them rather laughable.

Revolution also adds a slightly political angle (it was called Step Up Revolution in the U.S. for this reason), and moves quickly away from simple performance art to provide protest art against the hoteliers building plans. Again, this isn’t convincing as a serious political stand point but does give the story and its characters more purpose and weight in contrast to the previous films simple personal progression. This also makes the crew much more united, not just as a group but also as a larger community as seen in celebratory fashion in certain parts of the film.

The best part of the film however is no doubt the dancing itself. Carefully choreographed dancers, in suits, ties and trilby’s, all pile into a corporate building’s lobby for one of these protest demonstrations. This is visually stunning and easily the best dance scene of the franchise in regard to wow factor. Dance sequences proceed to get longer and more elaborate and there are more opportunities for these scenes as they aren’t reliant on auditions, final year shows or a structured competition. Each scene is beautifully choreographed and director Scott Speer captures every aspect of the scenes with style. This is a long way from the simple dance drama of the first film but this expanded vision works in Revolution’s favour and entertains to no end.,

Revolution may not win any awards for credible drama, but its dance scenes, and high energy pace easily make this a guilty pleasure you just can’t ignore.