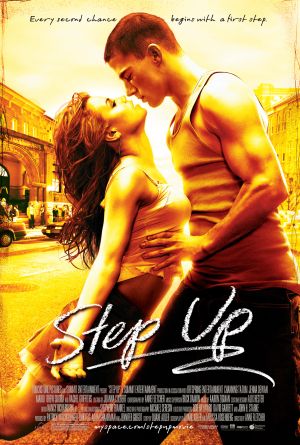 
Dance films rarely shake their behinds beyond mediocrity but Step Up managed it. Would you like to find out why?

When Tyler breaks into and destroys the property of an art school he must do 200 hours of community service to pay back his debt. While there he meets a student who needs a dance partner and he learns more than just a new dance routine along the way.

A film of this type needs to entertain on all aspects and most importantly with its core selling point: dancing. Luckily Step Up uses contemporary pop and hip hop with a mix of classical and urban dance moves to make a more than enjoyable set of scenes. These also act to show progression in the dancers themselves more than any greater meaning, so avoid stretched out scenes to convey character emotion, which would certainly isolate some viewers. Most of the dancing is also based around the two leads training together with this and the altering styles being interesting to observe.

The lead characters, Tyler and Nora both seem interesting although Tyler’s street/car-stealing/party-finding life is given a lot more screen time than Nora’s isolated family life with her mother and also a lot more entertaining to boot. But together is where they work best with Tyler’s lazy teenage attitude clashing with Nora’s more educated and determined outlook importantly avoiding terrible clichés.

Side characters even escape two-dimensional boredom, especially Miles and Lucy, who share a will-they-won’t-they love story with both characters being genuinely interesting. Miles in particular is shown as the nice friend, but he’s far from boring. His character even opens up a brief conversation about what art-school students’ ethnicity and background should be, with the expectation that its white privileged kids only: “Miles Davies, Tupac, Mobb Deep, those cats went to art school.” It’s a great use of the films time and although it isn’t revolutionary it shows the filmmakers wanted to avoid just filling the story with conventional and boring padding.

Dance films have never been so easy to swallow as this, and with a decent romance brewing, decent tunes and a clever and non-demanding story this film is hard to pick fault with.

Channing Tatum made his name on this, what do you think of it? Let us know in the comments below.