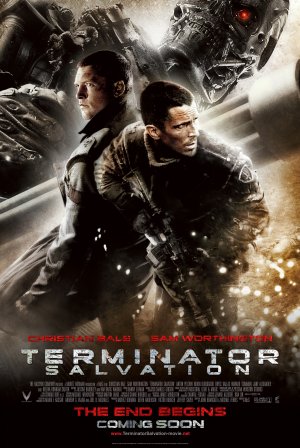 
Set after the nuclear fallout, what can this installment bring to the franchise?

John Connor is a revolutionary soldier working on a plan to end the war, but Marcus Wright, a new machine that thinks it’s human, could change the outcome of the war one way or another.

Being set after the nuclear fallout, director McG, goes to extraordinary lengths to create a brilliantly gritty but technologically advanced world. Costumes are a mix of simple, dark colours and more futuristic designs, while rusted cars, FM radios and submarines are all used as tools for the human characters. This is blended with the enemy’s visually impressive flying ships, huge robots, advanced weaponry and rider-less motorbikes that are both loyal to the natural evolution of technology seen in previous films and creates an exciting dust-ridden, advanced world.

McG also shoots most of the fast paced scenes with a handheld camera that continues to bring the viewer into the action, whether that is one extended shot of John Connor flying a helicopter in a battlefield or frantically keeping up with Marcus Wright during scenes with a huge Terminator model. As these scenes lack a contrasting current day setting, they aren’t quite as iconic as, for example, the police station shootout from the first film, but by blending his gritty realism style with futuristic sci-fi robots, flying ships and chase scenes, the result feels entirely fresh for the science fiction genre.

Introducing Marcus Wright, who was killed for his crimes before the machine war and uploaded into a machine body years later, means that the films futuristic elements can be introduced slowly through him, a device that works effectively while not condescending the viewer. Wright is also a cyborg with the mind of a human that results in an added depth to Terminator skin models that culminates in his becoming a Frankenstein’s monster type character by dealing with his creator’s gift of existence with a people who don’t want him. This is all fantastically done and with his abilities to hot-wire cars, fix electronics and fight confidently, he becomes the perfect action hero.

John Connor himself is shown as a confident leader and has a great sign off for a public radio broadcast that he does regularly: ‘This is John Connor, if you are listening to this you are the resistance.’ At this stage in his life he’s now considered a prophet to end the war that is highly reminiscent of The Matrix, but is pulled off to great effect.

With strong characters, great action scenes and a beautifully engaging direction, Terminator Salvation is a fantastic next step for the franchise.