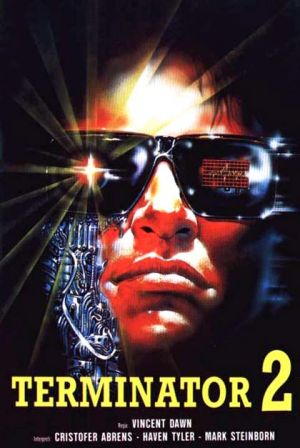 
Seven years after the original film and the future is still doomed, but how far will the sequel go to outdo its predecessor?

When a killer cyborg from the future turns up to kill John Connor, his mother and the same Terminator model from the first film must protect him while trying to change the course of history.

The Terminator offered some fantastic action scenes and the sequel expands on this; a dirt bike being chased by both a Harley-Davidson and a lorry being just one of several memorable scenes from Judgment Day. Explosions, gun fights and unique situations are certainly aplenty and translate the style of the first film well to bring an intense amount of suspense and danger to keep excitement high. This is all mixed with various gruesome horror elements like a Terminator model stabbing a man through the eye, or another slicing his arm skin off – it creates a brilliantly dark tone that threatens gruesome deaths if characters are caught. Most importantly however Arnold Schwarzenegger’s Terminator is now apart of the main character group which means the franchise can now amplify the action and be more aggressive rather than defensive in battles which makes the film much more entertaining.

Linda Hamilton drastically changed her appearance for her second outing as Sarah Connor, changing from a skinny, fashionable sex symbol to a calculated and violent soldier. Her transformation and cold exterior towards life, including harsh orders barked to her own son, add to the seriousness of the film’s tone and keep the devastating future of the nuclear fallout at the forefront of scenes. Her trials in a mental institute add a realistic psychological element and expand on the psychiatrist’s interest from the previous film. The break out scene showcasing her physical abilities and intelligence are fantastic to watch and are easily violent enough to show her as a seriously dangerous individual.

Judgment Day introduces John Connor: the man who caused all the trouble in the first place. Adding a slightly whiny but cocky teenager to the mix could have easily killed the franchise but having been trained by his mum from a young age he can trick cash machines, reload weapons and even bypass high security alarm systems making him an instant idol. Edward Furlong plays this character perfectly, balancing Connor’s childish manner with an attitude that is smarter and more emotional than his mother’s cold and calculated approach.

Incredible action scenes, sincere and entertaining characters and a dark tone make Terminator 2: Judgment day an action and science fiction classic; a rare sequel that out does the franchise original.