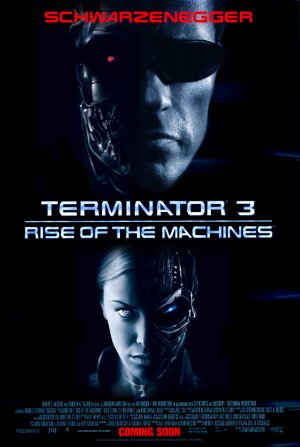 
Can Rise of the Machines rise to the occasion and bring the previous two films to their cyborg-infested knees?

The future revolutionary leader against the machines, John Connor, is now in his late twenties and must escape termination from an advanced killer cyborg. Also on the Terminator’s hit list is Kate Brewster, a woman Connor knew from childhood and together they must prevent the war from ever happening.

This Terminator outing opens in the traditional way, with a scene of revolutionary fighting that is visually impressive and the terminators, their flying ships, and weapons have never looked so good. Next we get to the Terminator’s arriving via time travel and this is without doubt where the film goes downhill. The Terminator series has always excelled at bringing memorable, big scale-action packed scenes to the screen, like the Terminator using a mini-gun against numerous police helicopters and cars in the second film. But Rise of the Machines unfortunately trades all of this in for poor, small scale action shoot outs like the Terminator walking out of a funeral parlour while police oddly shoot only at the coffin he’s carrying before he drives off in a hearse. Gone are the days of big police conflicts against the near-to invincible Terminator’s. Instead we get light-hearted action that seems to largely have no consequence on any of the main characters and will surely disappoint original fans.

They attempt at a touching scene of Connor trying to reconnect with the protecting terminator, but againdon’t quite pull it off. This is largely due to his surprise that the terminator doesn’t remember him although he should know that would be impossible and an off the cuff remark that makes Connor seem very stupid: “what you come off an assembly line of something?” This is worsened by terrible dialogue and delivery, and an awkward and a largely helpless Connor played by Nick Stahl: “I know this won’t help, but sometimes things happen that you just can’t change,” he said reassuringly.

Lastly, both the Terminator’s are given comedic and emotional responses that seem against the grain of previous films. The new female terminator appears seductive or angry in a lot of shots, undermining the robotic nature of these characters. Although action films often include cheesy one liners it seems inappropriate for a Terminator to say, “excuse me” before chucking another out of a truck, as does a seemingly untaught, “Talk to the hand” comment.

Terminator 3 is a light weight version of the previous two films, and is the first to lack a screenplay co-written by James Cameron. That could go some way in explaining the flimsy action, weak dialogue and a plot that fails to impress, easily making this the worst franchise outing to date.