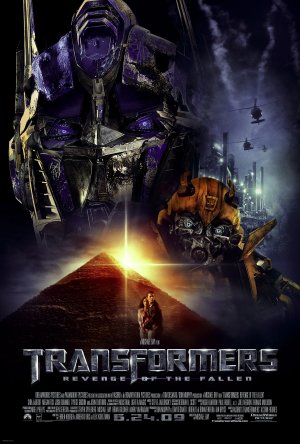 Transformers: Revenge of the Fallen (2009)

When Sam discovers a lost artifact the Decepticons think they can use it to destroy Earth. Sam must stop them from finding it while Optimus Prime and the gang face the enemy head on.

Revenge of the Fallen seems to have capitalised on its predecessor’s success but narrowed the tone to suit younger audiences only. Fart gags with parachutes, ball bag jokes and spurting engine oil tears all prove this isn’t a film to be taken too seriously, and at the same time alienates those eighties children (now adults) who loved the first film. So many clumsy dumb jokes are provided, with visual gags, simple henchman and a bashful plot making this a film that is hard to watch if you’re over twelve years old.

The human characters all have brash personalities, but the larger cast of Transformers, especially the Autobots, seem to have ditched the distinguishing characteristics they had in the first film. For example, only vehicle types, a silver sports car and black truck, seem to distinguish Sideswipe and Ironhide from being the same silent and kick ass metallic soldier. Michael Bay seems to have missed a trick here, as fight scenes could be much more involving if we could easily tell Transformers apart, and root for our favourites. The exceptions of course are the noble Optimus Prime and mute Bumblebee and we’re treated to two new personalised transformers in Jolt and Mudflap. But these characters avoid the smart humour of the first film and parallels to Jar Jar Binks are noted; annoying jokes and a disregard for any serious action moments make these ‘twins’ two of the most infuriating characters to watch and push the kids film argument into disrepute.

The film is beautifully shot, using slow motion and sun glare on gleaming Transformer metal. It’s obvious that beautiful is best for this sequel with everything shining, glistening and appearing perfect. However, action is over the top in typical Michael Bay style with many scenes becoming prolonged battles featuring tiresome explosions and a lack of any decent, memorable one on one combat. The use of Egypt is easily the most notable part of the film but without that not much sticks after the credits roll.

Transformers: Revenge of the Fallen is beautifully captured, but content fails to impress. Memorable action sequences are arguably nil and by isolating its older fan base with daft jokes the film becomes a poor follow up to such a strong franchise