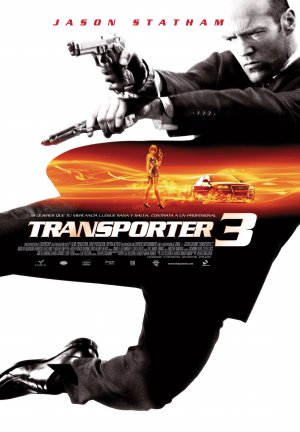 
Does Transporter 3 continue the last films success on its third attempt?

Frank is forced into driving from Marseilles through Europe with a Ukrainian government official’s daughter, but encounters some problems along the way.

Transporter 3 is quite different to the previous films to its merit, but still contains strong hints of both; Frank is now a proper transporter again so it’s more similar to the story of the first film, however the exciting action scenes and improved villains rival Transporter 2 for interest levels. This shows that the creators have obviously learnt their lesson and it’s paid off. Here Frank is forced into travelling across Europe with Valentina, while both are strapped to explosives threatening to ignite if they go too far away from the car. Instantly, this throws up an interesting problem (for the viewer at least) and the film comes across more similar to a Fast and Furious film with lots of car chases and general action around the vehicle. While this is infinitely better than the first, it does restrict the film at times – a restriction that Transporter 2 didn’t have.

Frank once again has a female friend accompanying him for the ride, this time in the form of Valentina, the Ukrainian government official’s daughter. She has the look of a traditional, yet slightly wild, Bond girl and it’s evident from the get-go that her and Frank will eventually get to it. Her role is interesting to watch as she seems to be one of the only characters that has any hold on Frank; she’s largely functional to allow our lead to flourish, but she lays the groundwork for Frank to become more endearing to the viewer.

A short word must also be said for Frank’s only acquaintance (they make a point of saying they’re not friends), Tarconi, who again brings a comical and light hearted side to the film. Played by Francois Berleand, Tarconi offers a point of warmth, and steps in and aids our lead when called upon. Without him the film would be less enjoyable, and it’s great to see that he’s stuck around for all three after his more major role in the first.

Transporter 3 is rather good at being an all-out-racing -action film with Frank reassigned as a transporter again; however it just falls short of the last film. Maybe Frank’s real job as a criminal deliveryman isn’t an interesting enough angle to make a top class film, but the stories and action have certainly improved since the beginning of the franchise.