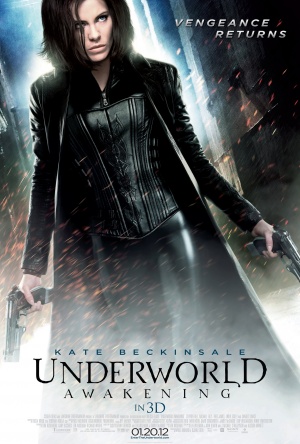 
Selene is back in black, but what more can the Underworld franchise offer that we haven’t already seen?

After Selene is awoken from a 12 year slumber, she finds herself in a laboratory after a mass genocide of her kind, the vampires, and the werewolves. She must protect a young girl from werewolves who want her dead and discover the enemy’s true intent. With its release in both 3D and 2D, the underworld franchise sees a major departure from the previous films, now with glossy locations of neon stripped cities, perfectly white laboratories and beautifully designed futuristic black-armoured soldiers. This looks much more like typical Hollywood than the humble budget beginnings of the franchise and with a clever use of certain story devices, like the use of silver nitrate gas bombs that create silver sparkles in the air, the film looks even more stunning. Despite it’s more mainstream look, Selene is even more bad-ass than she has been previously, with her embracing a killing spree that could potentially disturb the audience into questioning whether Selene herself is still one of the good guys. For example after getting stabbed by a scientist, she bends his bone out of his arm, and stabs him in the head with the same knife before cutting the throats of five security guards consecutively. Selene doesn’t appear to be straight forward hero material, which is actually a very refreshing side to Awakening; it keeps its loyalty to the previous films despite its shiny exterior. The film also awakens a new plot involving the uncovering of both the werewolves and vampires that results in humans committing a public genocide of both races. This new public enemy is shown fantastically in an early montage of news reports and footage showing a large scale massacre of helpless creatures, but with a jump forward 12 years to when Selene comes back into the picture, it’s hard not to feel cheated by the film skipping over this, especially when humans aren’t even the real enemy to gain vengeance from. In Evolution, werewolves had become much easier to kill than in the original, and disappointingly the trend continues in this movie. Selene effortlessly drops werewolves after a handful of bullets during all fight sequences and only one abnormally large werewolf proves to be any kind of challenge. This means the quantity of werewolves against Selene increases and causes action sequences to look more like simple training grounds for the hero, destroying most of the excitement that came from single formidable werewolves from the original. This weakening of her opponents makes her appear stronger but with very little challenging conflict, the film’s action sequences also get less exciting and more run of the mill.

Despite its perfect production values, Awakening seems to dismiss its roots of scary enemies and a deep rooted and engaging mythology. The film also manages to dismiss an interesting story concept early on, making Selene the only real stand out of the film as a no nonsense hero.

With higher production values and and a focus on big action, Awakening moves the franchise away from it's roots. For better or worse? Let us know your thoughts in the comments below