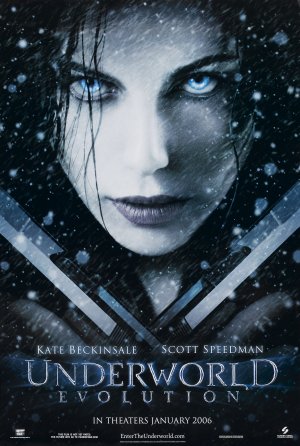 
Cult horror-action films often get a sequel, but filmmakers so often fail to keep the audiences interest. Underworld Evolution certainly comes out all guns blazing.

Selene and Michael start on a journey to uncover more of the history between vampires and werewolves. When Marcus, who is one of the first ever vampires, discovers that they have gone renegade he starts to hunt them down.

The film opens in a medieval setting, with vampires attacking a village that has become overrun by werewolves. This allows for the introduction, albeit briefly, of visually impressive sword fights, shining armour and senior offices on horseback with the films core story-line also cleverly being set up at the same time. The originators of the werewolves and vampires are shown as real brothers; with them being real breathing foes walking about rather than a historic references to characters, it makes the films mythology much more engaging and in depth than the last film. This also offers an enhanced epic tone due to the plot, to dig up an ancient and forbidden history, moving along like a grand quest.

Marcus, the major antagonist, is also hugely impressive as an ancestor vampire with his beautiful and dangerous black arched wings not only enabling more interesting chase sequences but also creating unique battles due to his wing tips being able to stab and kill opponents. His overall strength is also shown to be overpowering to almost everybody, and surprisingly as a villain, he outdoes Victor from the last film who was extraordinary in his own right as the leader of the vampires. Marcus in himself appears a twisted and angered version of his previous flashback self and is a far more unique and complex character due to his confusion and love for his brother than most action film enemies.

Evolution has drastically removed the original film’s budget-quality of limited effects, locations and action set pieces to become more of a traditional action blockbuster; but with its loyalty in design to its predecessor, the film isn’t disrespectful. It uses these bigger production values to create a similar continuing plot that builds and betters the first film’s mythology.

A notable difference to the last film is that the werewolves are vastly easier to kill. As a hybrid species, Michael has an excuse for easily snapping their necks, but Selene, who ran in terror in the last film, quickly dispenses of formidable werewolves by throwing a knife or a well-placed blade. This loses a lot of the general werewolves presence as an opponent and although there are other strong villains included this could hinder the franchise as it continues.

Bigger action sequences and an impressive lead villain make this sequel even better than the original. Do you agree? Have your say in the comments below