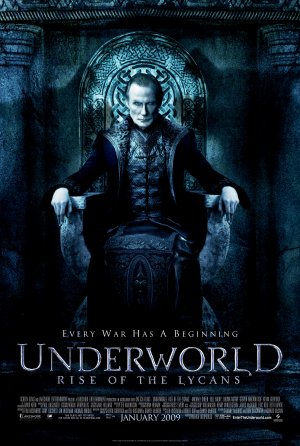 
By disregarding its current day setting and the main character, Underworld tries something a bit different: a prequel

When Lucien, a new breed of werewolf, disobeys his masters to save a woman he loves, he is condemned to death; but with the help of his disgruntled slave comrades an uprising is just around the corner.

Rise of the Lycans builds on the medieval setting of nobleman, slaves, sword fighting and grand castles that made up the brief opening scenes of the last film. It does well to use this to create a fresh perspective on the now well-understood two races with the setting proving more appropriate for the original tale of ‘pure blood’ werewolves who cannot transform back to human form. Instead, they survive within the forests and hunt vampires and normal humans and appear entirely appropriate as a pest that the vampires have to deal with on a daily basis.

The film focuses itself around the forbidden and secret romance between Lucien and Sonja: a werewolf and a vampire. Both characters are explored well with Lucien being a proud and loyal slave to the vampire clan, but he wants something more to life. Michael Sheen plays Lucien and adds an air of grace and nobility to the role that works brilliantly to show his equal standing when compared to the vampires. It also provides a certain credibility to the action film avoiding the usual animalistic instincts of werewolves. Sonja is played by Rhona Mitra, and introduces another empowered female character to the franchise. Although she’s interesting as a character – she is disobedient and a good fighter – we do lack any real engagement with her thoughts, as her reckless behaviour seems to undermine her passion for Lucien. Added to this, she is almost a duplicate of Selene, the protagonist in the first two films, but lacks the fully developed story and charisma of Kate Beckinsale.

For all of the positives, the story does seem somewhat stretched. It’s not lacking in its ideas, but fans of the Underworld films will be annoyingly familiar with the entire story from start to finish, and inconveniently the only people who will understand it coherently. The mention of ‘William’s kind’ for example won’t make too much sense to someone who hasn’t watched Evolution, while the tragic love story and werewolf-vampire situation is the main revelation of the first film, meaning that watching Rise of the Lycans is simply an elaborate retelling of the same story that was perfectly understood and told two films ago.

By choosing an established and already explained story in the Underworld mythology, the franchise has missed a trick on developing new characters and a fresh part of Underworld history. A film that is a reasonably good watch but is disappointingly unnecessary.


Prequel's can sometimes add a more interesting angle to a pre-existing franchise but we think Rise of the Lycans largely fails to deliver. What do you make of it? Let us know in the comments below