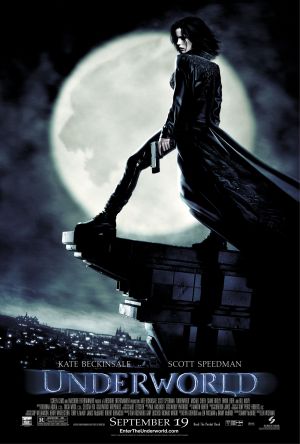 
There have been several films based on vampires in recent years, but how does Underworld weave Werewolves into the mythology?

When werewolves target a human, a vampire warrior gets suspicious and protects him. This causes the werewolves to start a barrage of attacks on the wanted human, sparking a chain of events that reignites a centuries old war and starts to unravel a hidden past between the two species.

The film starts with a narration from Selene, a vampire who gives a brief back story on the war between the Lycans (werewolves) and vampires. Straight off, the film delivers a well-developed culture in a coherent and modernised version that’s both intriguing and epic in scale. The introductory scene then switches to a sudden action sequence with guns blazing in a tube station. This quick change between calm moments and big, exciting action is constant throughout the film with both being equally captivating. The two species have upgraded from medieval swords and now use guns, syringes and silver bullets as their weapons of choice, bringing the mythical creatures into the 21st century in an unusual and intriguing way.

But it’s not only the tools of the trade that impress; Werewolf’s transform mid scene and look visually impressive towering above humans and vampires alike. They also make for formidable opponents with even the major characters being forced to run from them or quickly perish, including the very adept Selene, who looks genuinely terrified with only a single werewolf after her. This acts as a refreshing change from enemies in similar films that act more like cannon fodder than proper foes and puts the more beastly werewolves as a serious and dangerous contender for the more civilised and intelligent vampires.

Kate Beckinsale stars as the lead character, Selene, and she too is shown as a dangerous combatant and is introduced as an old and capable warrior during confrontations. She stays calm and resourceful when in danger, uses her wits to get out of situations and defies authority; all in all that makes for a very impressive female lead. Selene is only let down slightly by her dependence of men, whether that be from the leader who wants her as his wife, the main vampire Lord who she idolises, or the love interest who weakens her emotions. It would have been a brilliant change to see a female character truly cut off from domineering men, but the story does well to make her stronger throughout despite these restraints. Beckinsale herself puts on an excellent performance, brilliantly balancing her characters emotionally vulnerability while remaining ruthless when in combat.

Underworld delivers an impressive new take on old myths and brings well-developed action scenes and characters to make a vampire film that is unique, interesting and highly entertaining.


We think Underworld is one of the best vampire films out there but what's your take? Dig your fangs into the comments section below.