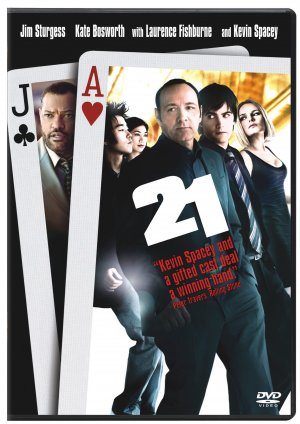 
The glitz of Las Vegas and super intelligent card counters, but what else does this true story have to offer?

When Ben Campbell learns he may not be awarded a scholarship to the Harvard School of Medicine his Maths professor suggests he join a secretive club that may help him pay the tuition. This club contains some of the smartest students in the school and they go to Las Vegas to card count.

Telling a story about highly intellectual students who use mathematics to count cards was always going to be a hard sell to audiences however director Robert Luketic’s use of snappy imagery with quick visions of objects to show Ben’s thought patterns help embed the viewer into his world. His use of imagery does not stop there as he shows the two sides of Ben’s character, his Vegas side and his Boston side, with the use of neon colourings for Vegas and a duller, muted look of Boston as Ben is immersed deeper into this world.

The change is also apparent in the characterisation of Ben by Jim Sturgess, he inhabits the role with naturalism and ease, much like Kevin here as Professor Micky Rosa. Sturgess’ narration is assured and relaxed much like his performance and it’s not surprising to see him continuing these type of performances in films like One Day and Cloud Atlas. One distraction is the similarity between the Vegas part of Ben’s character and most characteristics Jesse Eisenberg creates; Ben has the relaxed intelligence that Eisenberg uses in roles like Mark Zuckerberg in The Social Network, however Sturgess is able to use the less confident Boston side of Ben to create enough of a difference to make an interesting and engaging lead character.

As a counter point to the card counting group is security chief Cole Williams, played by Laurence Fishburne. This character avoids the easy trap of a two dimensional generic baddie due to intelligent writing and a clever performance by Fishburne. As he’s stuck in a changing world where almost all his contracts are disappearing due to new computer systems replacing him, this battle on two fronts shows his character as a more than capable opponent and at points its’ easier to root for him to succeed in catching the team, certainly not something you expect from the enemy of a likeable lead.

A strong cast, good writing and interesting visuals all work to grab the attention and make this a fun film that keeps you watching.

What is your favourite gambling film? Who is a stronger actor Laurence Fishburne or Kevin Spacey? Let us know your thoughts in the comments below.