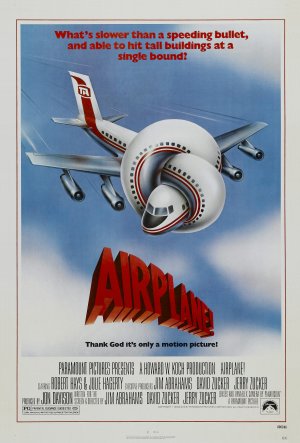 
Thirty years have passed, but does this hit comedy still fly smoothly?

When the crew and passengers on an airplane fall ill, the only person that can save them is ex-pilot, Ted Striker. Striker must try to save the plane and all it’s passengers while battling his fear of flying and rescuing his love life – all with the help of on-board doctor, Dr. Rumak.

Despite being a hugely successful comedy, Airplane! is largely centered around an irritating love story between Ted Striker and Elaine Dickinson; this acts as a constant distraction from the main story line with Striker and Dickinson’s past being repeatedly mentioned. However this back story is essential as a starting point for character growth and does set up a large amount of comedy elements, as well as adding an engaging side to two of the leads.

Writers/directors Jim Abrahams and the Zucker Brothers succeed in creating a funny film, largely by undermining the action genre throughout, “My squadron ships out tomorrow. We’re bombing the storage depots at Daiquiri at 1800 hours. We’re coming in from the north, below their radar.” “When will you be back?” “I can’t tell you that. It’s classified.” It’s scenes like this that really solidify the film’s lighthearted hilarity by maintaining its quick and witty dialogue.

The film is packed with some brilliant names, but specifically the stand out star is undoubtably Leslie Nielsen as Dr Rumak – he’s introduced mid-way through and develops a fantastic dynamic with almost the whole cast. His most regular interaction is with Striker and Dickinson and by offering one-liners and hilariously useless information he completes an integral three-pronged beacon for the story and comedy to revolve around. In addition to Nielsen, appearances from Peter Graves and a cameo from basketball star, Kareem Abdul-Jabbar enlarge the film and make it more welcoming to the audience with so many different stars interacting and making jokes.

The string of laughs and entertaining one-liners in Airplane! overpowers any problems in the story line to create one of the best slapstick movies ever made.