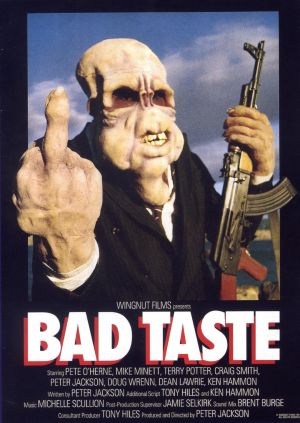 
Peter Jackson’s directorial debut is all guts, blood and shootouts, but is it a sure sign of his work to come?

After an elite armed unit uncovers an alien takeover of a rural New Zealand village, they make their way to the alien hideout and start a battle to protect the human race.

Before Peter Jackson wrote and directed the mammoth Lord of the Rings franchise he started out writing, directing and doing the special effects for cult horror films. That being the case, Bad Taste, is suitably gory with continual guts and blood pouring put of open cuts and gun shot wounds; you even see a man eating brains from another man’s head with a spoon. Jackson was obviously enjoying an experimental and extremely graphic romance with all things gore and it is the continual use of this that helps make the film as wonderfully silly, and therefore unserious, as it could be.

This incessant gore and evidently low budget push the film into B-movie status, which is certainly no insult. Bad Taste revels in B-movie glory by using silly characters, cars, guns, walkie-talkies and costumes to build a story that is both simplistic and ridiculous. Acton itself is reminiscent of kids playing with toy guns and rolling around after each other in a back yard. If the movie were treated more seriously it would be utterly disappointing, but because it’s done with tongue in cheek lines: “I just hope we’re in time to save the world,” and dodgy props, a calculator is used as the interface for a safe, it becomes an enjoyable and light-hearted guilty pleasure.

A stand out character of the film is Derek, played by Peter Jackson, who has a wacky and dorky nature contrasted by the gun-toting lads of the elite team. Derek is played by Jackson and is a rare display of his own talents as a comic actor, especially early on against a number of aliens. Quickly and easily popping his brain back into his head when it splits open is another example of the film’s wacky gore fest; he even uses a belt to tie it up before carrying on his duties. This is the kind of brilliant tongue-in-cheek moment the film continues presenting time after time to create a film that is entirely naff, but entertaining nonetheless.

Due to its tongue-in-cheek nature, with comedy, gore and naff characters, it was never likely to challenge more rounded films, but it thrives on what it is: a cheap off-the-cuff B-movie.