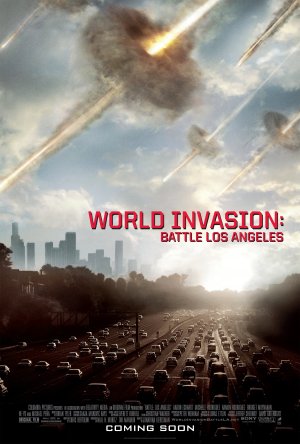 When Earth is hit by a series of alien attacks, Staff Sergeant. Michael Nantz must help lead a squadron to a nearby police station to save a group of civilians. Being ambushed around every corner, the group must get out of the blast zone of a nuclear bomb to defeat the extra terrestrial’s once and for all.

Battle Los Angeles offers a lot of similarities to Neill Blomkamp’s District 9: the freehand camera shots, the weapons’ technology and the look and shape of the aliens. However, this film only fully displays the aliens a handful of times, removing any chance of the audience emotionally engaging with a species trying to find a home. Thankfully, they are still portrayed as formidable enemies.

A major appeal is the fantastic character that Aaron Eckhart brings to the screen with the modern war hero, Ssgt. Michael Nantz. Having this kind of character as a lead will inevitably dwarf the supporting cast, as happens with the rest of his squadron. However, no additional hero figures are needed to compliment our tough chinned hero.

Despite the character strength of Nantz, the film’s unfortunate attempt at a back story portrays Nantz in a negative light, placing the rest of the squad’s trust in him at doubt. This only acts as an annoying distraction from the main storyline as it’s fairly obvious from the offset that these issues will inevitably resolve themselves.

A lot of the positives in Battle Los Angeles are largely down to the lead and his dominating character, who unfortunately isn’t helped by his tedious back story. However, mixing the traits of ‘end of the world’ and modern day war films well, this brings a new, fresh feel to the sci-fi/action genre, not seen since the likes of Independence Day or Cloverfield.

If you enjoyed this then you are likely to enjoy District 9.