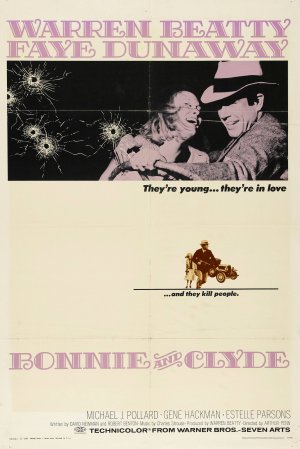 
The legendary Bonnie and Clyde may have lost its shock value but it still performs like a remarkably fresh crime film – could that be because we’ve only just caught up?

The film is based on a true story of two lovers committing bank robberies and store heists across a number of states between 1931-1934. The casting of Hollywood lookers Warren Beatty and Faye Dunaway meant the films themes: crime, violence and sex were glamorised causing unsurprising controversy in 1967.

Beatty and Dunaway play these unpredictable murderers with such charismatic enthusiasm you are unsure of how each scene will end. A notable example would be their meeting with C.W., an accomplice they meet at a petrol pump. The scene is drawn out and takes the form of an interview but until C.W. gets into his car we don’t know whether they will rob or kill him. Beatty and Dunaway excellently use this playful style of character portrayal to bring the film a great energy and much needed tension in between shoot-outs.

Intriguingly the characters are also hugely self conscious of their own portrayed image – essentially creating their own marketing campaign by sending photographs and poems into newspapers. Due to this character awareness, the film still appears current and fresh, if not cutting edge, almost fifty years on.

It could be said that Bonnie and Clyde kicked off the true anti-hero movie and for this we have Badlands, Natural Born Killers and the TV series Dexter to name but three.