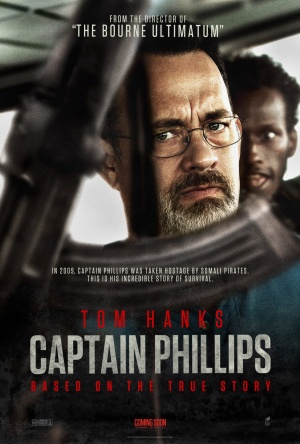 
How will a true story of a ship being taken over by Somali pirates translate to the big screen?

When a cargo ship is tailed by Somali pirates in international waters, the ships captain sounds the alert but when the pirates board the vessel and take hostages the situation quickly turn from bad to worse.

Tom Hanks plays Captain Philips, and unlike many of his recent film outings he plays a stern leader with no room for laziness or small talk amongst his crew. However, this doesn’t stop him from connecting with the audience as his eagerness to protect his shipmates and frailty in his situation creates an empathy that Hanks easily pulls off. This role provides a standout performance, mixing a stern character with very relatable reactions to an extreme situation. It’s an incredible achievement that Hanks can still convince an audience he is such a down to earth and engaging character, even though he’s such a recognised star.

Newcomer Barkhad Abdi plays Muse who’s introduced to us much like Captain Philips: he gets ready to board a ship and establishes the rules with his crew, but with violent consequences creating little empathy early on. Importantly, his motives are also explored and understood which is unusual for any action thriller, but especially for one with a focus on United States military as the saviours. By doing this the Somali situation avoids generalisation and instead Muse appears lost in a world he has no control over where his home seems to have forced his situation.

Once the two captains meet, the viewer is gripped to their seat, with some fantastic action scenes, especially when the pirates are attempting to board the ship – the characters build tension with stress levels that rise higher and higher throughout. For this reason Captain Phillips is a great unnerving watch and may leave you a little exhausted due to the turbulent story.

This is one of Hanks best movie roles to date and with an unrelenting suspense driven story and intelligent characters we would recommend this highly.

Let us know what you thought of Captain Phillips

Pirates of the Caribbean: The Curse of the Black Pearl