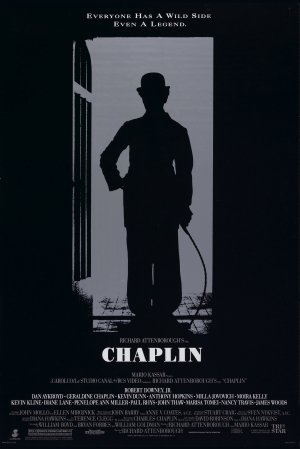 
A good biopic doesn’t just have to be a good film but has to show the true personality of the subject. How does Chaplin match up to the king of silent movies?

Chaplin follows the rise and fall of Charles Spencer Chaplin, played by Robert Downey Jr, from his life in the workhouse in Walworth, London to becoming the most famous silent movie star.

The narration has been created as a conversation between an older Chaplin and his Editor (Anthony Hopkins) while working on his autobiography and lets the narrative of the movie jump to the important moments of his life. Under the direction of Richard Attenborough, Chaplin successfully focuses on enough of his pre-Hollywoodland life to give a solid background without it holding back the film.

Counterbalancing Chaplin’s adored persona and inappropriate history with young women was always going to be a difficult task to capture on film however Robert Downey Jr’s simplistic and intense performance brings out Chaplin’s more likable side. The physicality in his performance is a highlight as it adapts from his early stage performances as an inebriated audience member to Chaplin’s classic character The Tramp although it is the wheelchair bound pensioner that shows how thoroughly Downey Jr. creates his character.

One standout member of the supporting cast is Geraldine Chaplin, daughter of Charlie Chaplin, who plays her own grandmother Hannah. Her performance of a woman floating between sanity and insanity is heart warming as only a real family member can be. This performance is aided by the direction of Attenborough who allows the camera to hold shots for longer than usual giving the audience a chance to become more engaged with the characters.

With loving direction and a well chosen cast, Chaplin is a treat for fans of the greatest silent movie star ever and manages to condense a magical life into 143 minutes.