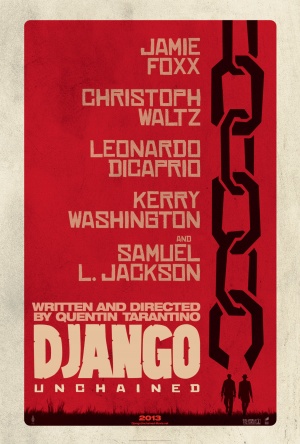 
As is widely known, Quentin Tarantino likes to make his own thing from something old, but has he now become old school?

Using the western genre Tarantino tells a story about a slave named Django (Jamie Foxx) who becomes a bounty hunter with the help of ex-dentist Dr Schultz (Christopher Waltz.)

The film is a departure from his previous film, Inglorious Basterds, which had suspense at the heart of every beautifully drawn out scene. Instead Django Unchained focuses on quick resolutions of potentially film filling stories e.g. locating and killing a gang of train robbers: this task must take less than ten minutes of screen time. And although surely deliberate these continuous anti-climaxes prove infuriating.

Along with these anti-climaxes, Tarantino’s major focus is unrelenting action: every few minutes someone dies either by getting shot, torn apart by dogs or being blown to pieces by dynamite. With all this comes a large dose of extreme violence as we have come to expect from Tarantino.

The major saving grace is Waltz’s ex-dentist character, Dr Schultz. Shultz carries a huge personality and disregard for human life. His introductory scene carries a long and tense conversation with slave captors which mystifies them as he sits on his tooth shaped wagon. His polite, eccentric nature and odd reasoning for befriending Django creates a depth unseen elsewhere in the film. I can only hope there’s a spin-off film: Dentist-Unchained.

On the other hand Foxx’s Django is a simplistic creature: a man who has been freed and has revenge and love in his heart. Foxx plays Django with uninspiring Tarantino swagger and the inclusion of modern hip hop among more traditional country and blues clashes his identity; is he supposed to be a freed slave or Jamie Foxx in a costume?

Django Unchained is a film which had so much potential. If you’re a fan of Tarantino you may well love it, but film fans who want a little more intellect – leave this one at the door.