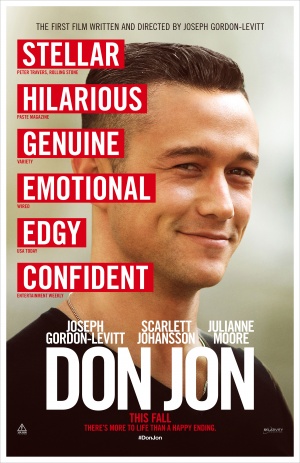 Having been a bachelor and ladies man for years, Don Jon finally gets a serious girlfriend, but his addiction to pornography proves troubling for the relationship. He must struggle to find a balance, or ditch one to make it past the problem.

Gordon-Levitt buffed up for the role of a hyper-masculine Italian stud and noticeably distances the character from his typical intelligent and left wing characters; Don Jon is a much more simple-minded man who loves a few things including his place, his ride, his body and his porn. At the same time as creating such a thought provoking film, Gordon-Levitt proves to be fantastic as the cocky lead character, subtly hinting at insecurities while maintaining a convincing hot headed macho persona. This is a great change and one that will be remembered for Gordon-Levitt fans as a film that brought him out of his comfort zone and into new territory.

However, the film does seem a little unfocused at times as despite the theme of pornography playing a major role, the film also raises interesting questions about dominate women, moving up the career ladder, and perhaps most directly the undermining of the Catholic confessional by Priests forgiving sins far too easily, allowing sinners to keep re-offending. These all dilute the main theme of the film, and it’s obvious that Levitt has more than one idea and more than one film in him.

Don Jon proves to be humorous, thought provoking and completely unique in turning the romantic genre into a discussion about pornography in everyday life; Levitt is certainly an exciting new filmmaker we’d like to see behind the camera again.