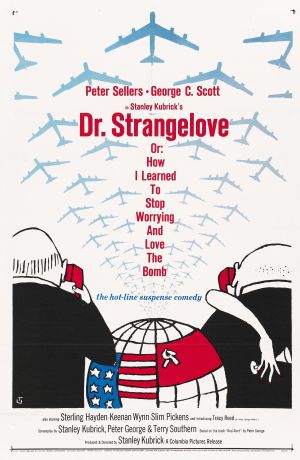 Dr. Strangelove or: How I Learned to Stop Worrying and Love the Bomb (1964)


Can a satire on the Cold War still have relevance today?

When a rogue General sends hydrogen bomb armed planes to attack targets in Russia, the president calls a meeting to discuss what action can be taken.

Dr. Strangelove oddly manages to create a great deal of realism by using the serious novel it was based on to feed the characters motivations; this results in wonderfully absurd reactions becoming more grounded no matter how over the top the characters act. By playing on the fear that surrounded the western world at that time Kubrick keeps a tension running throughout the film that keeps scenes lively and topical even today as discussions on nuclear weapons continue.

Peter Sellers ability to multi-role brings a psychological aspect to the film with each of his characters having a different opinion; this shows an example of the internal struggle one can face during a tough decision. During the scenes in the war room he shows his comedic expertise by playing both sides of a comedy duo: Sellers uses Dr. Strangelove to be utterly ridiculous in a wise man role but President Muffley steals the limelight as the relatable straight man that gets the excellently comedic line “Gentlemen, you can’t fight in here. This is the War Room”. Sellers was also originally cast as General Kong which would have meant a complete main cast of Sellers, but unfortunately due to an unconvincing southern accent he chose not to.

As a replacement for Sellers, Kubrick cast Slim Pickens and chose not to tell him that Dr. Strangelove was a comedy. Pickens therefore played Kong as truly and seriously as he could which results in a perfectly suited bombastic pilot character that cares about what’s happening possibly more than anyone else in the cast.

With dry humour and a real sense of danger Stanley Kubrick’s satire on the futility of war is extremely well written and deserves its place as a best picture nominee.